Habitat build could begin in October 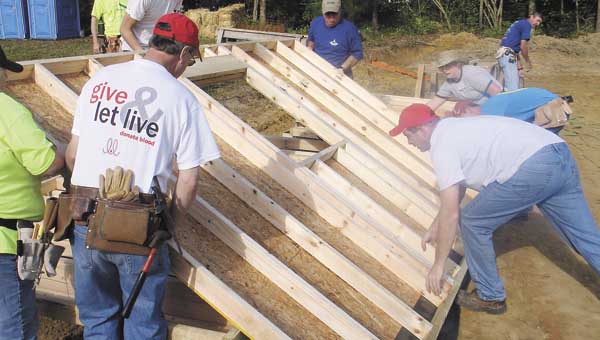 “Habitat has just announced two major milestones,” Pancake said Tuesday. “In spite of a down year, there were 9,000 families served this year, and, this World Habitat Day will mark Habitat’s 500,000th house, which is in Kenya, and its 500,0001st in New Jersey.

“We hope to be building right along side of them in Florala,” he said.

Pancake said Habitat has yet to obtain a clear title to the Florala property, which will become the new Cypress Street home of Sherrie Stewart and her family. City officials approved the property sale last month.

“There are a few loose ends that need to be tied up, but it’s in the lawyers’ hands,” he said. “We’re kind of on hold, but as soon as we get ownership of (the property), work can begin.”

Still, volunteers and donations are needed before the build begins.

“There is always a need for donations,” Pancake said. “It doesn’t matter if it’s enough to buy one box of nails or a whole pallet of shingles. Every little bit helps.”

A team of volunteers is also needed once construction begins, he said.

“We are seeking volunteers for the Florala building,” he said. “We need both skilled and unskilled labor. That means everyone from contractors, electricians and plumbers to people to help with feeding the crews.

“We’ve said it before, but you don’t have to be able to swing a hammer to volunteer,” he said. “We can find something for you to do.”

Those wishing to make donations to the local HFH chapter should mail them to: Covington County Chapter of Habitat for Humanity, PO Box 1034 Andalusia, AL 36420, and can be designated for the Florala build.

Those wishing to volunteer for the Florala build can call 334-222-0827 and leave a message.

“I promise, someone will call back,” he said.

Fall is in the air?