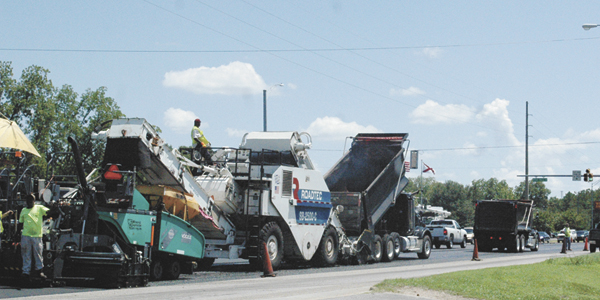 Construction scenes like this one recently in Andalusia could become a familar sight around Covington County.

A recent proposed five-year plan by the state transportation department shows that more than $18 million could be spent on Covington County projects.

The plan, which covers the fiscal year beginning in October through Sept. 30, 2016, outlines the projects by year and includes new bridges and the resurfacing of roads.

“Alabama does it differently in that we operate on a five-year plan,” Harris said. “This is basically (ALDOT’s) way of looking ahead. These things are just now being discussed, and as we all know, we anticipate 15-30 percent reduction in federal funds over the next six years.”

Harris said a series of public meetings will be held in the future to get input on the state’s transportation improvement plan.

On the list for the upcoming fiscal year are three projects – the painting of the bridges on Alabama highways 55, 51, 123, 1 and 6, and two phases of resurfacing and widening of U.S. Hwy. 84 from the Conecuh County line to 0.5 mile west of Ala. Hwy. 55 in River Falls.

That $18 million figure does not include the cost associated with other rural planning projects that are also outlined in the plan that include a corridor study for four-laning U.S. Hwy. 331 from the Florida state line to U.S. Hwy. 84 in Opp, a Safe Routes to School grant project in Florala that will establish sidewalks from downtown areas to Florala High School, the resurfacing and stripping of the parking lot at Florala State Park.

Harris said previously that the widening of U.S. Hwy. 331 is a “logical project” since the road is already four-laned above Opp and across the state line in Florida.

“The idea is to meet the two in the middle,” he said.

Harris said engineers will work to identify a “swath that could be one mile or five miles wide and plot out a number of alternate routes.”

Then, he said, meetings will be held to garner public input on the routes. It is a process that will be repeated until a preferred route is chosen; however, it is unknown when those public meetings will be set.

The second of three local businessmen indicted by a federal grand jury for his involvement in a $53 million loan... read more