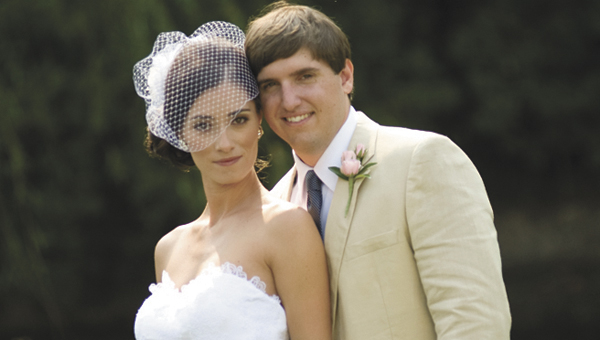 Mr. and Mrs. Donald Bryan of Andalusia are pleased to announce the marriage of their daughter, Elizabeth, to Jonathan Kimbrough, son of Mr. and Mrs. David Kimbrough of Montgomery. The garden wedding was held at Sweet Gum Bottom Bed and Breakfast on Sat., June 11, 2011, at 11 o’clock in the morning, with the reception following.

She is a graduate of Huntingdon College, where she earned a bachelor’s degree in vocal performance. She will complete her master’s degree in music education in December. She is currently the choral director at Montgomery Catholic Preparatory School.

He is a graduate of the University of Alabama, where he earned a bachelor’s degree in management information systems.  He is employed as project manager with Alabama Interactive.

In spite of the warm and humid South Alabama weather, friends and family joined the couple in celebrating the occasion, as sentiments of the past mingled with thoughts of the future. Lace from the bride’s mother’s wedding dress was used to make the pillow carried by the ring bearer, who carried a rose in memory of the couple’s deceased loved ones. Lace from her mother’s wedding dress was also used to fashion the comb for her veil.

Music for both the ceremony and the reception was provided by a string duet. The wedding was directed by Mrs. Jerri Stroud. She was assisted by Betty Davis and Kathy Wyatt, who served as reception directors. The event was catered by Sweet Gum Bottom Bed and Breakfast. Flowers were provided by Alan Cotton’s Florist.

Spiritual lessons to be learned from sole collection

Imelda Marcos will always be remembered for the 3,000 pairs of shoes she collected while her husband, Ferdinand, ruled as... read more