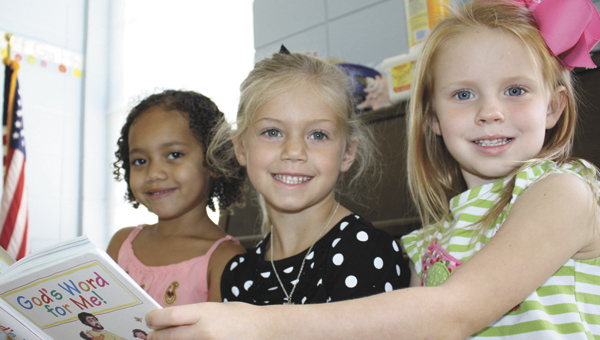 Above: Kyndia Watts, Maggie Ruth Wiggins and Sarah Katherine Reese take a break from play to flip through a picture book. The girls are among the children attending FBC-Andalusia’s ‘Mothers Day Out’ program, which is held on Tuesdays and Thursdays. Top: Amanda Mullens and Sarabeth Tarpley watch as others play. | Stephanie Nelson/Star-News

As the saying goes, a mother’s work is never finished, but who says Mom can’t take a break?

Not those at Andalusia’s First Baptist Church, who have recently begun their new year of its “Mother’s Day Out” program.

“They are taught things necessary for kindergarten such as letters and numbers,” she said.

Farrington said this is the third or fourth year she has been in charge of the program, but it has been ongoing at the FBC for years.

“It used to be strictly somewhere to drop off your children,” she said. “Not now. We had Mrs. Margaret Bennett, who used to be a kindergarten teacher, who will teacher the children.”

Additionally, students will have a small Bible study and will sing songs.

“It’s more like a Christian preschool,” she said. “We follow the school year dates. If they are out on vacations, we are too.”

Mother’s Day Out is held on Tuesdays and Thursdays from 9 a.m. until 1 p.m.

For more information, contact the FBC church office at 222-5151.

Join in for Sunday lunch at the Newtons

Even though I like to cook, I always enjoy being invited to someone’s house. A fellow choir member at Grace... read more