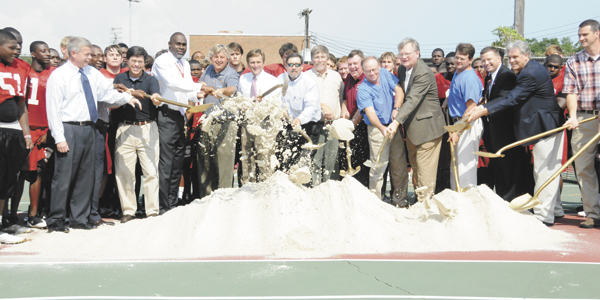 After four years of meetings, phone calls and negotiations, the dream of 11 men is about to come true.

That dream began with discussions Williamson and Tim Bryan had about the need for a new athletic facility.”

“We called Earl (Johnson) because of the position he was in, and he’s an Andalusia alum.”

Williamson said the three met in Johnson’s office on the court square and agreed to form a team of 11 people.

“We decided we wanted 11 people, because that’s what it takes to run an offense or a defense,” Williamson recalled. “So we went out looking for other people who wanted to be a part of it.”

They encountered quite a few “non-believers” along the way, he said.

“At the first meeting, we thought it would take a couple of years to do this,” Williamson said. “We went through different avenues to put together the finances, but it really all came about through the last stimulus package. Seth Hammett stepped in, and put us in contact with the right people.”

While each of the foundation members personally contributed money to the project, most of the $2.3 million project is being funded with Qualified School Construction Bonds secured by the board of education, which is essentially a no-interest loan. The foundation agreed to give the board $8,000 to pay closing costs for the project, as well as bridge any loans necessary until the school board pays off its debt for Andalusia Elementary School.

Williamson said there were times when the group almost threw in the towel. Yesterday was a dream come true, although one he didn’t get to see because he was out of town on business.

“Me, my brother, Lucky, John and Lex were actually playing here when the old facility was built 35 years ago,” he said. “We really wanted this for the kids.”

Cope, who spoke at Monday’s ceremony – which included all members of the current football team, the band and cheerleaders, said, “This is the greatest thing I’ve been a part of since playing in the championship game in ’74.”

“All students will see the benefits of this facility,” Cope said. “It’s time to focus on our next dream.”

Architect Joe Donofro said the facility is designed after Auburn University’s 40-yard indoor practice facility. Alan Williamson said he knows of only three other similar high school facilities in the state, at St. Paul in Mobile, Prattville, and Deshler.

Andalusia Mayor Earl Johnson said the facility will allow current and future students to improve their abilities as athletes as well as students.

All agreed it will be good not only for the school, but also for the city.

“If you’re moving to town, you have a son, and you go to tour the high school, everything is there right now except the athletic facility,” Williamson said. “Now we have it along with the bandroom, auditorium, volleyball gym – everything you need to make it a first-class campus. It’ll be good for the city of Andalusia.”

Police are searching for the man who dropped down from the ceiling and stole pocketfuls of synthetic marijuana from an... read more