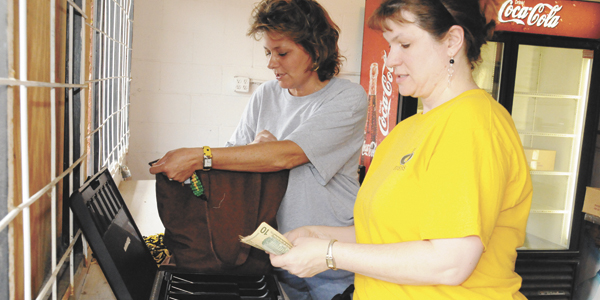 Before the first stripe is painted or the first cleat touches the field, countless hours are spent readying for Friday night football games.

It takes not only students in the form of players, cheerleaders and band members but also the work of parents and football lovers who fill the stadium and man the concession stand.

Booster clubs are vital to any sports program, and football especially, officials said. These parent and volunteer-staffed clubs work to raise money and promote athletic achievements.

At Andalusia, Quarterback Club president Ken Raines said each year the club sits down with head coach Brian Seymore to see exactly what the team needs.

Raines said the Quarterback Club, which mainly consists of parents of football players, set up the fundraisers necessary to help the coaches and more importantly, the players each year.

In addition to the sleds, the AHS Quarterback Club will be painting the block letter “A” at the center of the football field this season and provided the coach a program where he can isolate each position on the field on film.

“It’s all about helping the boys,” Raines said.

Another project the QB Club is working on is raising funds to remodel the press box at the stadium.

In Opp, the Bobcat Booster Club offers its supports to all sports at Opp High School and Opp Middle School.

“We raise money through membership, reserved seat sales and merchandise,” said booster president Brett Ballard. “We have two main fundraisers – a banquet and a golf tournament.”

“I believe local booster clubs are more important than ever because of the economy and proration,” Ballard said. “We also try to funnel everything through the booster club rather than each sport going to the same people, parents, grandparents and merchants, over and over to raise money for their support.”

At Florala, Jeff Burleson, president of the Florala High School Booster and Alumni Club, said the need for members is greater than ever.

The group, which meets at 6:30 p.m. on the first Monday of the month in the school cafeteria, is open to “anyone who wants to support the athletic program.”

“What we do is provide extra funding over and beyond what individual sports teams earn themselves,” he said. “Last year, we gave some $4,000 to the programs.”

For athletes, that meant new filming equipment for the football team, a trip to basketball camp, scorebooks for the baseball team and hotel and meal expenses as is the case for the track team.

To raise money, the club holds four fundraisers a year. Like most clubs, ad sales from the annual football program are the group’s largest revenue source. The group also holds a spaghetti supper, a homecoming dance and a 3-on-3-basketball tournament.

“We’re also the sole provider of the end of the year sports banquet, where, without us, our athletes wouldn’t be recognized for what they do each year,” he said.

In Pleasant Home, booster club president Preston Weaver is in his second year on the job. He is one of eight who is actively involved in the club.

“But we need 30,” he said. “We’re always looking for new members. There’s four of us running concession, three of us cooking and all of us have kids playing but we don’t get to watch.”

“Whatever these kids need, that’s what we’re here for,” he said of the club. “They’re what it’s all about.”

To join, find the group on Facebook. Meetings are held the first Tuesday of every month at 6:30 p.m. in the school cafeteria.

Red Level recently reestablished its Quarterback Club, and its something that president Kyle Adams and a host of others felt was important to the school.

“The booster club is basically to assist the football club,” he said. “We handle the concessions. We provide a pre-game meal for the football team.”

Adams said the group’s first organized project was to clean the stadium and give it a facelift.

The club will have four main fundraisers throughout the year, including an alumni game, shirt and hat sale, Boston butt sale and the Bobby Dye 5K and Family Fun Day. To join, call 804-1111.

In Straughn, quarterback club president Mark Elmore said the group consists of “dads” of the players and they mainly help with up-keep of the football field.

“Anything that needs to be done, usually the dads of the players will help,” Elmore said.

Elmore said the club used to hold fundraisers, but now it uses sponsors to help buy new equipment where it is are needed.

Elmore said the “dedication of the parents” in the club helping SHS head football coach Trent Taylor and his staff is the reason why the club is important to the school.

“We want (Straughn) to be a fine place for our kids to play ball,” he said. “We all think Straughn’s a great school.”