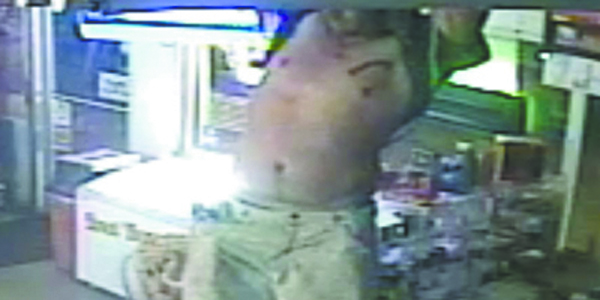 Police are searching for the man who dropped down from the ceiling and stole pocketfuls of synthetic marijuana from an Andalusia convenience store Sunday night.

The Andalusia Police Department has released this photo, taken from a video surveillance camera, of the suspect.

Lt. Paul Dean with the Andalusia Police Department said the incident occurred at approximately 11:30 p.m. at the Stop-N-Go on Martin Luther King Expressway.

“From what we can determine, he was able to gain access through the attic, and then kick a hole through the ceiling tile,” Dean said. “He dropped down onto the counter, stuffed his pockets with incense-type material, or synthetic marijuana, and exited back the way he came.”

No cash or any other item was taken during the burglary.

Dean said the white male used a shirt to cover his face and mask his identity.

“But he has this tattoo, which we think is pretty identifiable to those who know this man,” he said.