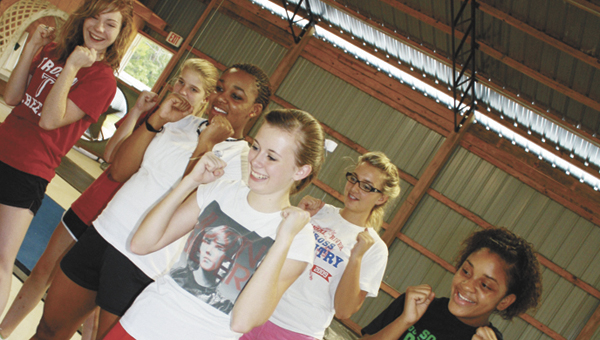 SECOND IN A SERIES

“Just because we don’t run across goal lines, slam dunk basketballs or hit home runs, it doesn’t mean we can’t change the score.”

While that’s the official motto of this year’s Pleasant Home varsity cheerleading squad, any squad captain or sponsor will agree no truer words have been spoken about a group’s ability to motivate players and crowds alike on football Fridays.

It’s also a motto that the girls take very seriously.

“Before football season even begins, our cheerleaders have begun prepping for Friday night football games,” said PHS cheer sponsor Trinity Dyess. “We’ve attended two camps, learned five dances, numerous cheers and chants, on top of learning how to work together as a squad.”

When coordinating the physical movements of anywhere from five to 15 girls, it can be challenging.

“These girls are dedicated to the sport of cheerleading,” said Florala Wildcat cheerleader sponsor Shannon Lee. “In the summer, they’re in the gym three times a week, lifting weights and conditioning, and then it’s on to three days a week, if not four, of practice. Not to mention the time it takes to make 45 signs and Friday night run-throughs.”

By the time the first football game rolls around, squads have mastered the presentation of school spirit, the women agreed.

“On Fridays, the girls are pumping up the team by wearing our school colors of red and white, selling spirit items like pom-poms and tattoos, and getting everything ready for the pep rally and football game,” Dyess said. “These girls do whatever it takes to make sure they are motivating their football players.”

And the crowds, too, Lee said.

“We are very fortunate at Opp because we have an awesome student body,” Harrison said. “Every game and game night, we have a great student section who is very involved in the cheers and the games.”