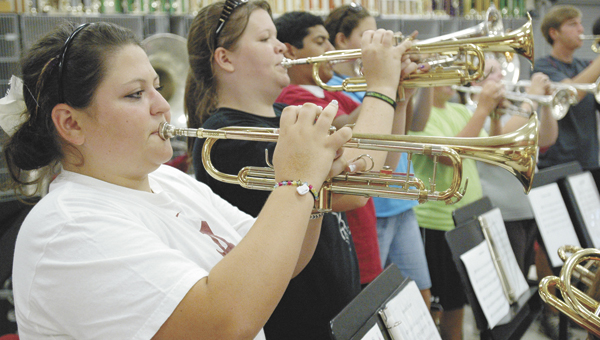 Before the fight song is played as the football team makes its grand entrance during the opening football game of the season, band members have already put in hours of time working to perfect their performances.

This year, his 139-member band’s show will feature jazz music, including favorites “Summertime,” “It Don’t Mean a Thing” and “Li’l Liza Jane.”

“We’re doing a salute to jazz,” he said. “I kind of decide what we’re going to play based on previous years. I try to rotate from rock shows, jazz shows to Latin shows to give the kids a variety of music during their tenure in high school.”

Shellhouse said the show will be short excerpts from each song.

At Red Level, Band Director Jack Hall said he chooses the music based on his band’s experience level.

“The first thing I do is get a list of music my kids are capable of playing,” he said. “Then I try to figure out a basic theme. This year’s show is kind of a punk rock theme. We’ll be playing Blink 182 and Green Day.”

The ultimate goal is to perfect the marching routine, the directors agreed.

“We’re working on it,” Shellhouse said. “Our goal is to add a new song every week or two until we add the fourth song on. It’s taken us about three and a half weeks to get our first song on, which is always the hardest. Then, next week, we’ll put on our second song.”

Hall said he determines the marching show by the music.

“Usually the music dictates the moves or how many moves they make,” he said. “Since we have an inexperienced group, I try to limit the number of moves. If I had a mature group, I’d put in twice as many.”

Hall said the band started practicing the last week of July and had band camp during that week and the first week of August.

“We practice on Tuesdays and Thursdays,” he said. “And we may pick up a short practice on Wednesday, if we need it.”

The band is comprised of 50 students, he said.

Shellhouse said his band is really working toward October, when they’ll go to marching festivals.

First you make a roux

It takes lots of pots to get gumbo going for 300 people, and that’s what Terry Kyzar is busy doing... read more