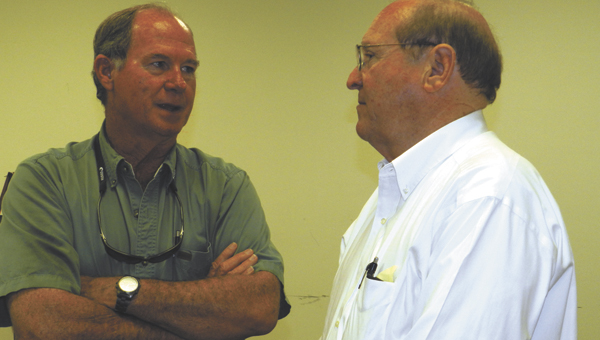 Alabama Commissioner of Agriculture John McMillan said yesterday he doesn’t think residents of urban areas of Alabama understand the impact of the state’s new immigration law, which is being challenged in federal court this week.

“I understand the complexity of this issue,” he said. “But if you eat any fruits, vegetables or chicken, you can bet your life it has been touched by a migrant worker at some level.”

McMillan, who’s spending the week visiting with farmers across South Alabama, was in Covington County yesterday. He had breakfast with government leaders, toured area farms, and had lunch with a group of farmers, courtesy of the Farmers Federation.

McMillan said he met last week with a couple who own nine Mexican restaurants in Alabama and 150 employees. One of the owners spent eight years and $30,000 getting legal citizenship, he said.

Alabama’s new law makes it a crime for illegal immigrants to work or solicit work, and penalizes those who hire them.

“It has the potential for putting farmers not just at an economic disadvantage competing for labor, but to actually put them out of business,” he said.

Alabama growers of produce, peanuts, cotton, poultry, and sweet potatoes all depend upon migrant labor, he said. And those workers, many of whom are here illegally, do work that farmers can’t hire Americans to do.

“Frankly, I’m worried how we’re going to get Tuscaloosa and Birmingham rebuilt,” he said.

McMillan said part of his quest in visiting farmers is to understand how this and other issues are impacting them. He said he’s had quiet reassurances from legislators that they will revisit some facets of the law that produced unintended consequences.

Students at Straughn High School and Andalusia High School learned the repercussions of “a couple of beers” Wednesday. Through the... read more