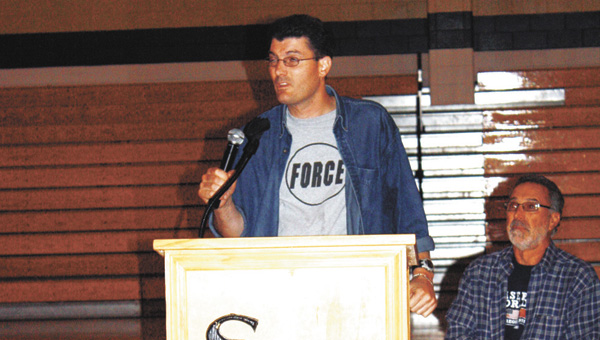 Students at Straughn High School and Andalusia High School learned the repercussions of “a couple of beers” Wednesday.

Through the muddled words of Brandon Silveria, students listened as he told them, “I had the world at my fingertips. It all changed with one stupid mistake.”

Silveria’s “one stupid mistake” was driving home after a party where he indulged in “a couple of beers” in 1987.

Silveria had dropped his last friend off at his home before proceeding to his home. He never made it.

The then-17-year-old fell asleep behind the wheel of his car, crossed the double-yellow line and smashed head-on into a tree.

The accident nearly cost him his life, putting him in a coma for more than three months. He was placed in a two-year rehabilitation, where he had to learn everything all over again.

The Alabama Alcoholic Beverage Control Board, along with Diageo, the world’s leading premium spirits, wine and beer company, sponsored the event.

Before the accident, Silveria was an all-star teen, a coveted wide receiver for the Los Gatos, Calif., football team, was committed to Boston College for a full-ride scholarship on the school’s rowing team, and had a cheerleader girlfriend.

Silveria’s story has been featured on “Rescue 911,” “The Today Show,” and “Health Watch.”

While Silveria has to deal with the pains of seizures and other obstacles from the accident, it has also affected family and friends.

His father, Tony, told students that his son’s medical bills are more than $5 million.

“You don’t think about that you are putting in jeopardy everything your family could work hard for,” Tony Silveria said.

Additionally, Brandon Silveria’s friend, the last person he dropped off before the accident, had to undergo therapy for two years because he regretted not taking the keys from Silveria.

During the speech, a segment from the 1992 “Rescue 911” is played. Someone during the video calls Silveria a hero for speaking to America’s youth.

Tony Silveria cautioned students not to think of his son as a hero.

“What Brandon did was illegal,” he said. “This is the price he paid.”

“I thought I was invincible,” he said. “Take responsibility for the choices you make. Peer pressure will force you to make wrong choices – choices that will affect the rest of your lives. Don’t say I don’t understand. I’ve been there. I hope to God none of you have to go through what I’ve been through.”

Lt. Lance Price with the Alabama Beverage Control Board reminded students that it is illegal to consumer alcohol in Alabama under the age of 21.

“I have no problem taking you to jail. That way your parents will come get you,” he said.