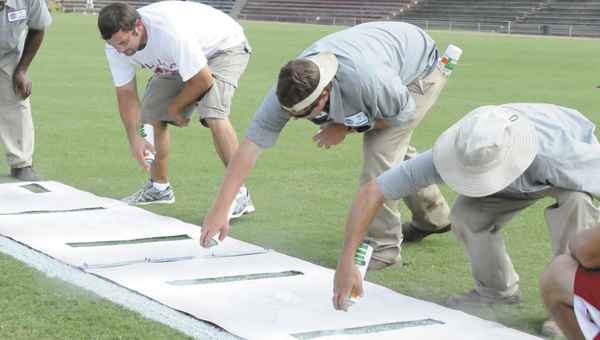 “You do everything including mowing, sanding, watering, aerating,” he said. “It takes a lot of time to make it look good.”

Ingram said during the summer, he cuts the field twice a week.

“I try to cut it a different way each time,” he said. “Irrigation is key. You try to water it early in the morning. You don’t want to do it at night because of mole crickets. So we set timers to make sure the sprinklers come on in the morning.”

“It’s a lot of hard work for sure,” Taylor said. “The city provides the chemicals and fertilizers and things like that.”

The chemicals Taylor uses are the same used at the golf course at LBWCC.

“Wherever they want it to look good, I use the stuff I mostly use here,” he said.

Taylor said he aerated the field at AHS in May, and ever since then, he’s been cutting the grass two to three times per week.

“This week, we’ve gotten a little fertilizer and stuff like that out there to make it look good for (tonight),” Taylor said. “We cut it when we get to it and keep the weeds out, and that helps the grass look good.”

Ingram said this summer has been a bit challenging because of the lack of rain.

“The irrigation keeps it alive, but it’s not like rain,” he said. “There’s no substitute for good rain. It lets all the nutrients in.”

Ingram said as soon as each football season is over, it’s time to prepare the field for another season.

“You have to get an aerator and poke holes in the ground,” he said. “Then you sand it with a top dresser and level out the holes. Sand is a good fertilizer for grass. It makes for a lot softer level playing field and helps prevent injuries.”

Additionally, Ingram said he sends soil sample to Auburn to check the pH levels, and fertilizes the field twice a year.

Ingram said he hopes to upgrade the field’s irrigation system after the season.

“Coach (Bobby) Dye did an excellent job and he taught me,” he said. “Plus, I’ve always been around tractors all my life.”

Taylor said in addition to the football field at AHS, he manages the turf at the high school baseball field, the baseball and softball fields at LBWCC, has added the grass for the grow-in at Johnson Park and the turf for the World Series and other tournaments at the Dwight Mikel Sports Complex.

“Wherever grass has grown this summer, I’ve pretty much had my hands in it,” he said.