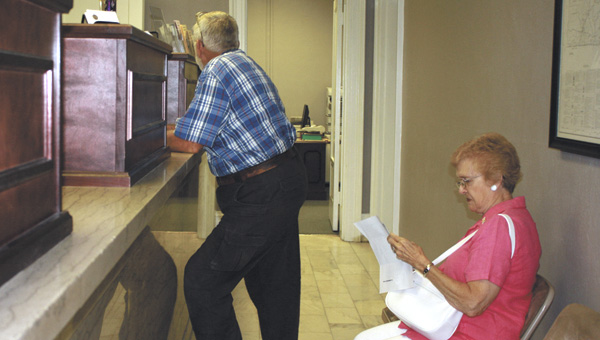 John Wesley of Straughn and Mary Kyzar of Andalusia were the only two people conducting business in the probate office.

On Sept. 1, Alabama’s new immigration law could translate into longer lines in the county probate office if the decision is made to end online and mail-in tag renewals.

Language in the new law requires people to present documents in person to prove citizenship when renewing licenses and tags.

“The impact of that is being debated right now,” said Covington County Probate Judge Ben Bowden. “The issue with renewals is that (office staff) are not having the face-to-face transaction, so no one sees their documentation.”

Typically, that proof of citizenship is an Alabama driver’s license, he said.

Bowden said the law states that an illegal alien or someone not lawfully present in the U.S. is not allowed to enter into a business transaction with the state or a political subdivision of the state – which means the county or a municipality or any level of government. It also goes one step further and defines a business transaction to include vehicle registration, license and tag renewals and the purchasing of a business license, he said.

The practice of online renewals is growing. In October 2009, the county collected $5,980 in online renewals. That number more than doubled to $13,844 in October last year. Bowden said while those figures represent less than 10 percent of the total gross collections, the number is growing. The same cannot be said for mail-in renewals, which in comparison, had office staff processing 819 in October 2009 and 736 last October.

“It’s less time consuming to do things online than to stand in line,” Bowden said. “If people have to come in and do these transactions face-to-face, there will be an increased workload, no doubt. Then, one of two things will happen, you’ll have to wait longer in line or we have to increase our manpower.

“It doesn’t seem efficient to me, and I wasn’t put in this office to make people wait in line all day to get their tag renewed,” he said. “We’ve worked really hard to get that line down, and we’re not going to let that go. We’re going to have to figure out a way to serve the people in an efficient way – whatever that is.”

Bowden said he believes that more discussion and debate will occur between now and Sept.1 over that part of the law in regards to renewals. Bowden said some judges are taking a strict position and stopping online or mail-in renewals, but he plans to wait for a preliminary ruling by the state attorney general’s office and the federal courts before implement the new regulations.

“We definitely require proof of lawful citizenship, typically in the form of an Alabama driver’s license, at the initial registration of a vehicle. Now, as for the renewals, I’ve not decided whether or not to shut down online or mail-ins or to require that a person provide their Alabama driver’s license number when they do their renewals.

“But at this point, I would urge everyone to be prepared to show their driver’s license or some other official government ID like a passport or visa when registering a vehicle,” he said.