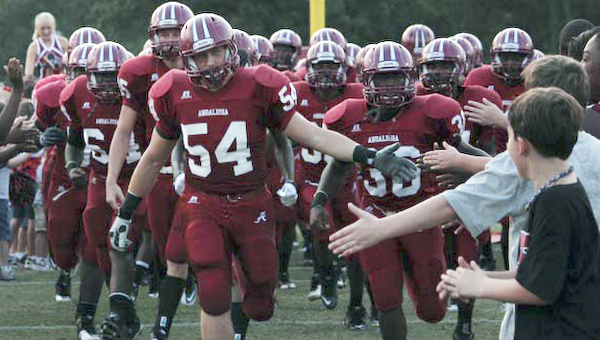 The Andalusia Bulldogs got the 2011 high school football season started off right with a 34-14 victory over Carroll High School Friday night.

Andalusia opened up the scoring for the night on their second possession of the game when senior Javonte Johnson finished off an eight-play drive with a 9-yard touchdown run. Sophomore running back Ralph Sims had an 18-yard carry that set up the Johnson touchdown. The PAT was no good.

After a strong first series on defense, the Bulldogs gave up a touchdown on the first play of the Eagles’ second possession. Anthony Baker was able to haul in the Austin Holt pass between two Bulldog defenders, then won the foot race to the end zone for a 78-yard touchdown. A successful PAT gave the Eagles a 7-6 lead.

After forcing a punt from the Eagles on the following drive, the Bulldogs took over on the Eagles’ 43. The Bulldogs used four different ball carries on the drive before Lakelyus “Fathead” Adams used his speed to get around the left side for a 13-yard touchdown run. The Bulldogs were successful with the 2-point conversion to take a 14-7 lead.

The Bulldog defense was strong again the following series with Sam Byrd making a great hit in the backfield to stop De’mon Anderson for a 3-yard loss.

Following a Bulldog turnover, the Eagles took over inside Bulldog territory and Broome needed only two plays before racing 29-yards for the touchdown and tied the game up a 14-14.

It was two series later before the Bulldogs would find the end zone for the third time in the first half. This time senior C.P. Rogers was able to hit Adams streaking up the middle for a 15-yard touchdown pass and catch with just 50 seconds left in the first half.

The Bulldogs scored two more times in the second half, with the first points coming on a 2-yard run from Sims.

Following the touchdown, the Bulldog defense looked tough once more, forcing another punt after junior Brandon Lane sacked Holt on a third and long play.

The final touchdown of the night came from senior Wesley Maye on a 20-yard run that left the score 34-14.

“We made some adjustments at halftime and we played a lot better football in the 2nd half. Both quarterbacks also ran the offense very efficiently,” Seymore said.

Andalusia senior linebacker Jacard Townsend had a high ankle sprain Friday night. He’s expected to play next week, when the Bulldogs open region play on the road against Alabama Christian Academy in Montgomery.