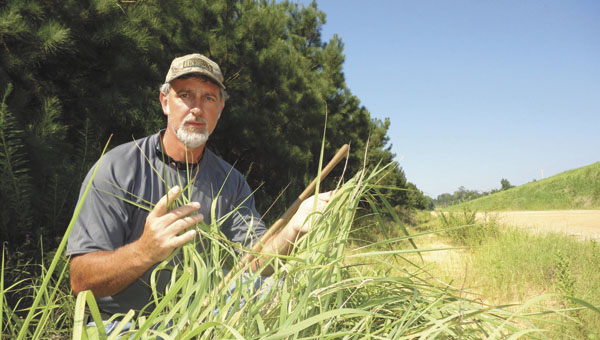 Neil Dansby holds a specimen of cogongrass, an invasive, opportunistic grass that is invading the woods. Dansby, along with the Alabama Forestry Commission, is working to eradicate the species.| Stephanie Nelson/Star-News

On the roadsides and in the forests of Covington County, the green stalks of cogongrass swaying in the gentle breeze are deceptive. They look nothing like the destructive, pervasive invaders they are.

Instead, this foliage is stealthily infesting between 500,000 and a million acres in Alabama, Mississippi and Florida. Two years ago, the state forestry commission was given $6.3 million in stimulus funds to fight cogongrass in Alabama. Now, a statewide task force is on the hunt to eradicate the plant in Covington County.

Neil Dansby, a local biologist, has been hired to accomplish just that, but needs the public’s help in locating all the sites in the area for treatment.

“I know it’s hard to believe, but this stuff is worse than kudzu,” Dansby said. “It just takes over the land. Once it gains a foothold in an area, it’s only a matter of time before it spreads.”

The grass grows in circular clumps and is identifiable by its fluffy, white, plume-like seedheads in the spring and the sharply-pointed root ends. It produces an exorborant amount of heat when burned, which can kill tree populations in forests.

It is easy to confuse with other species of grass, such as Johnsongrass or vasey grass.

It was originally introduced to Alabama near Grand Bay in 1911 as seed in packing material from Japan. Since then, it has spread through four defined methods: mowing, motor graders on dirt roads; from the logging and timber industry; and by air.

“The how of it being spread is simple,” Dansby said. “It’s transference. You mow here; take your blade over there, and there you go – the cogongrass has a new home.”

Last year, nearly 200,000 sites of cogongrass were documented in Alabama by the AFC task force. Dansby started in Covington County about a month ago.

“There is a program that will allow for the treatment of up to 10 acres (of cogongrass) per landowner at no cost,” he said. “All we need is for someone to call and say where it is.”

Dansby said the program will cover the cost of two years of bi-annual treatments to kill the grass. A GPS unit is used to document and record the exact location of the site, he said.

“It’s all over this county from Wing to Rose Hill,” he said. “There’s so much silicone in this stuff that animals won’t eat it. Once it gets started you have to make sure you treat it until it’s dead.”

Dansby said landowners should call him at 334-804-7480 if they believe congongrass is established on their property.

“Even if you’re not sure what kind of grass it is, call,” he said. “This plant will take over our land if we let it.”