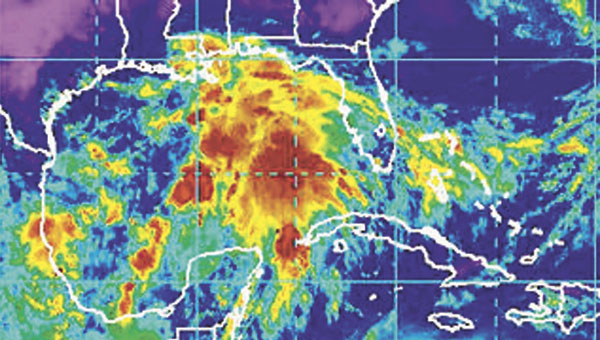 A tropical depression has formed in the Gulf of Mexico and could turn into Tropical Storm Lee by this afternoon and could dump as much as 10 inches of rain on Covington County and affect beach plans for the Labor Day holiday.

The depression is moving slowly to the northwest at 6 mph, with winds of 35 mph, and is located over the central Gulf.

Models forecast the storm could make landfall anywhere from Texas to the Florida panhandle.

Covington County EMA director Susan Harris said locally there will be rainfall, but the amount of rain will depend on where the storm makes landfall, if it becomes a tropical depression or storm.

“Really at this point we are just on the line of very heavy rainfall,” she said. “That means there’s a possibility of anywhere form five to 10 inches of rainfall. We’ll know more Friday.”

Harris said if Covington County does see heavy rainfall, it’s important for residents to be careful and watch for isolated flash flooding.

“Stay off the roads and report whatever conditions you see,” she said. “But right now, we’re in a wait and see mode.” On Wednesday, at least oil companies were removing and preparing to remove nonessential workers from their platforms in the Gulf of Mexico as the wave moved toward the area.

“We are reaching the peak of hurricane season and it is important for Alabama residents to monitor the weather and stay informed,” said Gov. Bentley. “My office, along with our state Emergency Management Agency, will continue to monitor this storm and stand ready to respond.”

According to the Mobile office of the National Weather Service this storm has the potential for heavy flooding, rough surf and dangerous rip currents.

Opp is one of the systems in the state who are still giving free tickets to ball games. | File... read more