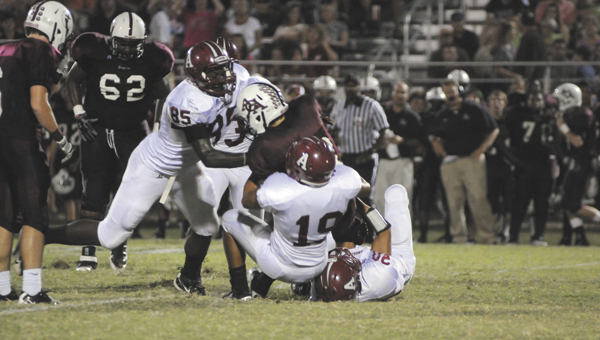 The Bulldogs held the Eagles to one touchdown, on a kickoff return

The Bulldogs’ only allowed score came on a kick-off return for a touchdown with more than three minutes left in the third quarter.

“A bunch of kids stepped up (Friday night),” Seymore said. “Offensively, we did a better job taking care of the football.

“We threw the ball a little better, and I thought both of our quarterbacks did a good job,” he said.

Andalusia got off to a good start to begin the second half when junior Hiren Patel intercepted an Eagle pass to set the ball up on the Bulldogs’ 30-yard line. The Bulldogs didn’t convert the offensive possession to points, and punted the ball away.

C.P. Rogers, who completed one pass for eight yards, took over for starter Michael McCalman at quarterback for the Bulldogs on their next offensive possession.

Rogers rushed a 17-yard gain to put the Bulldogs in good scoring position, and junior Javonte Johnson brought the ball to the two-yard line and then a penalty forced the ball back a few yards.

Ralph Sims punched the ball in from five yards to give Andalusia a 20-0 advantage after a Courey Hopkins successful extra point attempt.

ACA answered with the kick off return for a touchdown on its next offensive possession.

The Bulldogs drained time off the clock, and put six more points on the board when Sims ran up the middle after another penalty call.

At the start of the game, Andalusia won the toss, and a slight miscommunication led the Bulldogs to start with the ball on offense.

Andalusia couldn’t anything going on its first offensive possession, and punted the ball away.

The Bulldogs’ defense held the Eagles to a three-and-out on their first outing on defense.

On their second offensive possession, McCalman connected with senior tail back Jacard Townsend for a 14-yard touchdown with 2:38 remaining in the first quarter.

On a negative note, the Bulldogs had a total of 12 penalties in the game.

Seymore said the team will work to correct those mistakes this week at practice, and added that the team played “aggressive” football.

“The offense played hard,” he said. “Alabama Christian gave us a lot of different looks on defense. Danny Madison makes the plays, and he can be elusive, but our defense tightened up.”

On special teams, Seymore gave nothing but praise.

“They did really good,” he said. “There were two times where we missed tackles on kick offs and punt returns. It’s still a work in progress.”

Later in the first half, and with 5:41 left in the second quarter, Andalusia drove the ball down to the one-yard line where Townsend punched the ball in for six and the Bulldogs led 13-0.

Rogers led the Bulldogs in rushing with 118 yards on eight carries. McCalman had 64 yards rushing 13 carries. In passing, he was 5-of-7 for 98 yards.

Andalusia will play host to St. James next Friday night.

Turvin hands off to Short MONTGOMERY — St. James strutted out to a 13-0 half time lead, and scored late... read more