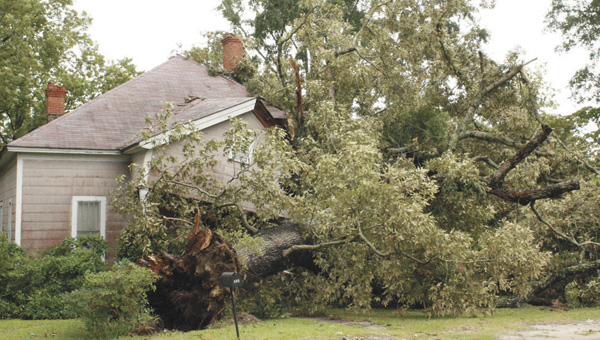 Winds took down this tree on Sanford Road Monday afternoon.

The remnants of Tropical Storm Lee brought flash flood and tornado watches and warnings to Covington County over the Labor Day Weekend, temporarily turning off the lights in some parts of the county.

In Andalusia Monday, as many as 2,500 customers lost electrical service, Jeff Puckett said.

“We had a bunch of trees and pecan limbs knock the power out in the wind,” he said. “It was scattered, but we had as many as 2,500 customers out.”

The first outages were reported at 10 a.m. Monday, he said, and all power was expected to be restored by 3:30 p.m.

Earlier in the day, tornado warning sirens were sounded throughout the county, but the storm mostly brought much-needed rain to the county.

Lee dropped as much as 14 inches of rain on some portions of Louisiana before moving across Mississippi and into Alabama.

Drug Task Force agents ended a six-month investigation Thursday with the arrest of an Opp couple suspected of operating a... read more