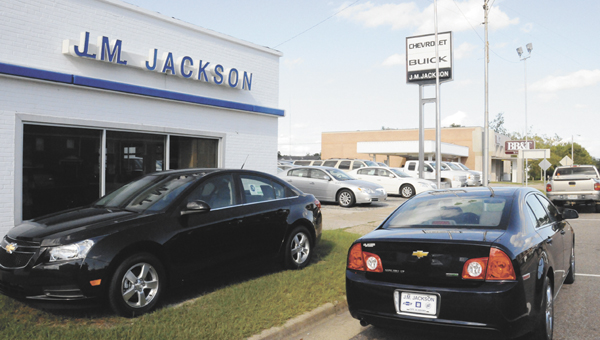 This J.M. Jackson location in Opp will close once the new dealership is finished.

The Sanford Town Council approved an agreement Tuesday that will allow J.M. Jackson to construct a $2.5 million car dealership and service center.

Johnny Jackson, owner of J.M. Jackson Buick Chevrolet, said at a public hearing for the project that he hopes to begin “turning dirt” at the 6-acre site located across from the South Alabama Regional Airport within 30 days “if things align with the financing.”

Jackson said the new dealership was a requirement when the company signed its new contract with General Motors. Under the new contract, the company will sell Buick and Chevrolet; however, once the dealership is constructed, he hopes to be able to add Cadillac and GMC to line-up, but “there’s no guarantees,” Jackson said.

The company had originally intended to relocate to a 7-acre site on the Opp Bypass; however, when GM realigned its dealerships after the government bailout, the local dealership’s territory expanded to include the entire county, as well as parts of Crenshaw, Coffee and Geneva counties, Jackson said.

“Then, that location didn’t quite work, but Sanford was a perfect fit – it’s right in the middle of the county,” he said.

“And a boost,” Thomasson said. “I think (the dealership’s) presence here will be beneficial for years to come.”

Jackson said the dealership’s entire operation – from sales to service to its used car lot – will move to the new location. He said he also hopes to maintain the current used car lot’s location, but operate it under a different business license.

“We’ll also expand our service department to include tires and alignments, as well as quick lube,” he said. “We’re looking at 12 to 14 service bays.”

Jackson said the U.S. Hwy. 84 location “right across from the helicopter” is ideal for the dealership.

“The visibility is a huge advantage,” he said. “I don’t think that people will mind much that they have to cut over a little so that we can service the entire county.”

Jackson said he hopes to have financing for the deal secured by the middle of the month.

The dealership will occupy 4.5-acres of the 6-acre site, and site work for the project has already been let for bid, he said.

As part of the agreement, the dealership will pay the city $20,000 annually for the next 20 years, and the city will front $85,000 for infrastructure and in-kind services for the construction of the dealership.

“If I had to pick a company to come to our town, J.M. Jackson is a great one,” said Vaughn Bowers, a town council member.

J.M. Jackson has occupied its current building and location since 1945, and Opp Mayor H.D. Edgar said the city was “sad” to see the dealership leave.

“We understand it’s a business decision and one they had to make to survive in the automobile industry,” Edgar said. “We hope someone will come in with a dealership to replace this revenue.”

Pay and benefit increases for city employees will cost the City of Andalusia an additional $376,000 in the 2012 fiscal... read more