Lots of tomatoes, no dirt 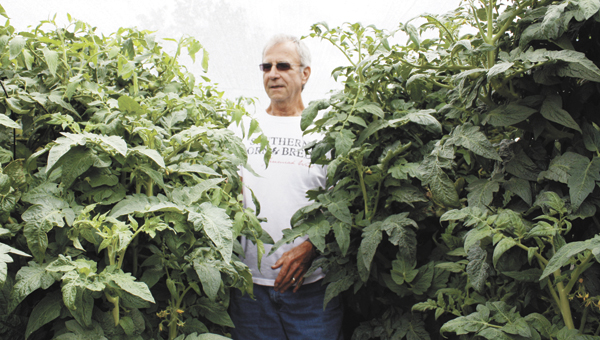 Good news, tomato fans – Robert Rawls has enough to keep the entire county in tomatoes for a while – or at least he will have soon.

Rawls has some 700 tomato plants of all varieties, including Talladegas, Perones and Pace, that he’s grown using a hydroponics system.

Hydroponics is a method of growing plants in minerals and water without using soil.

In this case, Rawls uses an Indian plant called coconut fiber, which he says will last a full year without having to be replenished, as a base for his plants.

Rawls has grown his different varieties from a seed, and plans to sell the tomatoes to the public. He said he would ultimately like to team up with local growers to offer local residents, locally-grown, organic fruits and vegetables.

“Anyone else wanting to do the same thing can call me,” he said. “You can grow any kind of plants using this system. I’d really like to see a lot of local, fresh, hydroponically-grown produce.”

So far, Rawls has grown peppers, beets, carrots, cucumbers and watermelons this way.

Rawls said the hydroponic system has been a good way to make crops with the hot, dry summer.

“All you have to do is make the mix and set the timer,” he said. “You don’t really have to mess with it much.”

The system is strategically designed to water each plant three times per day, he said.

Since last week, Rawls said he’s picked some 200 pounds of tomatoes, and once he is finished with his tomato crop, he’ll plant a fall vegetable crop.

“I hope to plant kale, cauliflower, lettuces, cabbages and beets,” he said.

Those who wish to see Rawls’ crops can visit him four miles down County Road 63, just South of Searight.