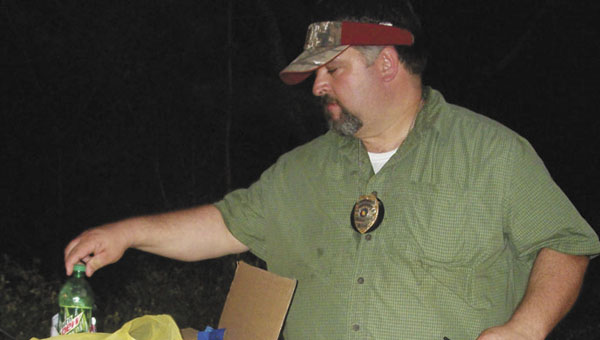 DTF Commander Mark Odom said when agents received information that a shipment of meth supplies was coming to Stephen Glen Morgan’s Van Walker Loop home earlier that afternoon, they, along with Alabama probation officers, decided to pay him a visit.

“As soon as we came up to the residence – which was a camper trailer – we could smell the very distinct odor associated with a clandestine meth lab,” Odom said.

Odom said there were two other residents inside the camper, who were identified as Michael Moody and Bobby Hardey, both of Andalusia.

“When we asked them to step outside, we could see a meth cook in plain view,” he said. “At that point, we obtained a search warrant and recovered the items.”

The three men were charged with manufacturing, trafficking and possession of drug paraphernalia, and booked into the Covington County Jail under a $770,000 bond. Odom said both Morgan and Moody are Alabama probationers.

He said while the number of labs found throughout the county is on the rise, there might be a misconception that “meth is making a comeback.”

“The fact of it is, meth never went away,” he said. “The new one pot method just makes it more difficult find these labs, but as we get more intelligence on the way and where people are cooking, you’re going to start to see more and more arrests.”

A repetitive thief and drug user was ordered to the state department of corrections Thursday after violating the terms of... read more