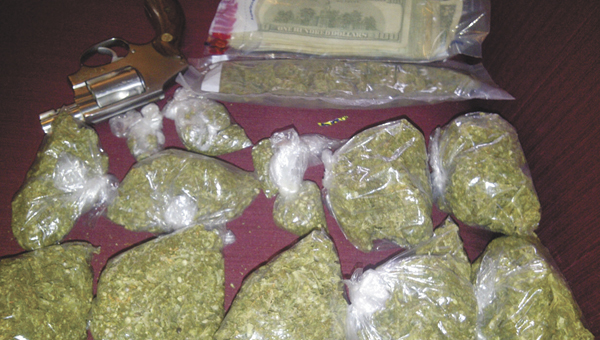 A routine traffic stop netted nearly a pound in pre-packaged marijuana Wednesday and sent a River Falls man to jail.

James Allen Stallworth, 20, was stopped on Williams Street in Andalusia for a traffic violation; however, when Andalusia Police Officer and Drug Task Force Agent Roger Cender became “suspicious” of the car’s contents, he called for a K-9 assistance.

“That’s when they found not only the marijuana, but also a firearm and a large amount of cash inside the car,” he said. “While the find wasn’t the largest marijuana find we’ve had, it’s still a good chunk, especially when considering it was separated into bags, for what we believe, was the intent to sell.”

Stallworth was charged with first-degree possession of marijuana, possession of drug paraphernalia and carrying a pistol without a permit. He was booked into the Covington County Jail, where he is being held on a $506,000 bond.

Weeks to resign from Housing Authority

The Opp Housing Authority said Thursday it expects to receive voluntary resignation from its executive director in the coming days.... read more