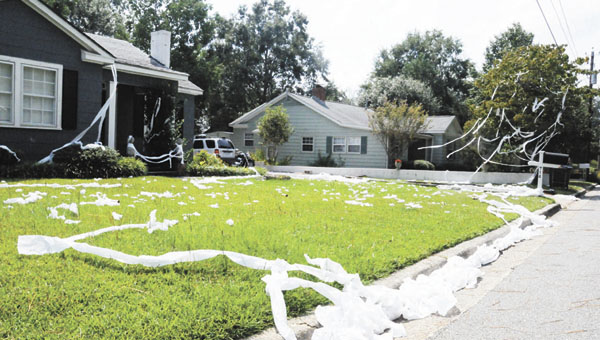 This 2nd Avenue home was the target of an annual homecoming tradition of rolling houses. | Andrew Garner/Star-News

As soon as homecoming week rolls around, so does the longstanding tradition of toilet papering the neighborhood.

The proof can been seen lining the streets from Bellwood to Green Acres, from the Country Club out Antioch Road and all points in between have been littered with toilet paper.

The act is typically done by throwing numerous toilet paper rolls in such a way that they unroll in mid-air and thus fall on the targeted object in multiple streams, and is traditionally done at the home of the school’s senior students.

Rolling occurs in the very late hours, and students travel through the city in carloads and caravans, parking down the street from the target, and sneaking through the yards to the target without being detected. After the house and trees are rolled, the students flee the area.

When morning comes, so does the question of how do you clean it up.

• First, survey the damage. Before pulling the streams down, look to where the long lines start and end. This can prevent toilet paper from being all over the roof.

• Start the job. Start picking up the toilet paper and put it in a large garbage bag or two. Remember not to put it in a pile on the lawn or driveway because if the ground is wet, you’ll have to scrape it off, and that is no fun.

• If you need to use a ladder to get some out of a high area, use caution. Many times the grass in the morning still has dew and water in it, and it could be slippery. You don’t want to head down to the ER on the same day you were toilet papered.

• Use long sticks, poles and rakes to reach high places. It’s a safer way to get the toilet paper down than with a ladder.

• There aren’t really any tips for you when picking up the little, shredded pieces of toilet paper off the grass. It just takes time and patience to get all of those pieces.

• Once you’re done, put the toilet paper in your recycling bin carts with “paper” labeled on it or flush it down the toilet.