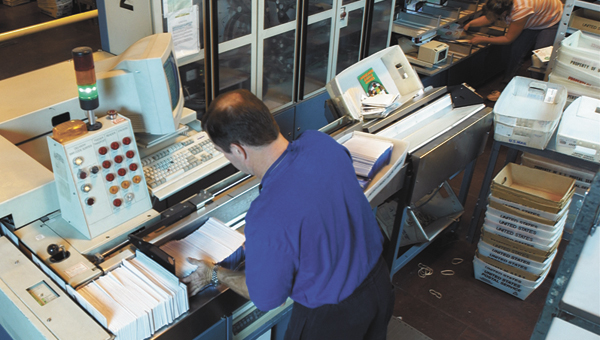 Receiving a letter or magazine the day after its mailed could become a thing of the past, if a feasibility study shows it would save money to close some Post Office processing facilities, officials said Thursday.

“Due to dramatic decline of first-class mail and the related revenue loss, the postal service is proposing comprehensive changes to service standards that could allow for significant consolidation of the postal network in terms of facilities, processing equipment, vehicles and employee workforce,” said spokesperson Debra Fetterly.

In order to do this, the Postal Service plans to conduct a study to examine the feasibility of consolidating some of its operations.

In Alabama, the study could leave only the Birmingham, Montgomery and Mobile processing operations open, which could increase the amount of time it takes to receive some mail.

Locally, mail is taken from the Post Offices to Montgomery every afternoon, where it is processed.

Fetterly said the Post Office network is currently tied to overnight commitment in its present service standards, which is the number of day between the acceptance and delivery of a piece of mail.

What does this mean to the average customer?

“Customers will likely no longer receive mail the day after it is mailed,” Fetterly said. “In all likelihood, this change will go relatively unnoticed for the average customer.”

Additionally, the service standards would also change for periodicals. Currently it takes one to nine days to receive them. It could change from two to nine days.

Customers should still have the option of Express Mail in most locations.

Fetterly said the Postal Service is continually improving efficiencies by making better use of space, staffing, equipment and transportation to process the nation’s mail.

“Improving efficiencies has become increasingly important, given the significant reduction in the amount of First-Class Mail that enters the postal system,” she said. “In fact, since 2006, First-Class Mail has declined by 25 percent.”

It is estimated that the closures could save the Postal Service up to $3 billion annually.

“If the study date indicates that consolidating operations makes sense, a public meeting will be held for community members to ask questions and provide feedback,” Fetterly said. “The business case for consolidation and community feedback will be considered, and then a decision will be made as to whether or not the mail processing operations should be consolidated.”

Fall weather on tap for weekend