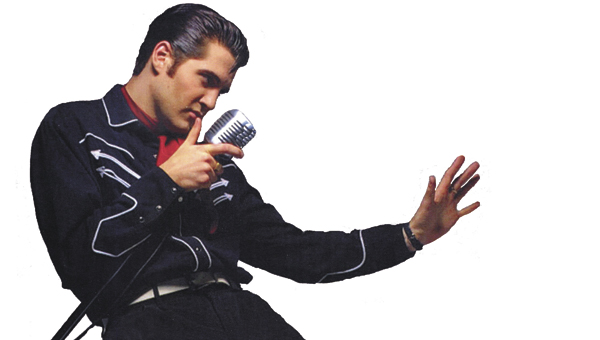 Travis Ledoyt seems to channel Elvis, not only in his appearance, but also in his smooth voice.

The start of Covington Arts Council’s 2011-2012 season should be music to people’s ears – literally.

And why wouldn’t it be with a line up like famed Elvis-impersonator Travis Ledoyt, the “Legends of Motown,” nationally known comedian Henry Cho and the outrageous comedy of “the Queens of Bingo?”

CAC Director Paula Harr said this year’s entertainment is a bit different from years past.

“Right off the top, you’ll notice this year is filled with music,” she said. “This year, we’re doing a tribute to baby boomers, event though everyone will enjoy it. Everything we have is good for all generations. It’s going to be a fun year.”

Harr said she chose Ledoyt to open this year’s show because of the outstanding reviews he’s gotten at other venues across the U.S.

“When you look at him, he looks like Elvis, true, but when he performs, he channels him,” she said. “When Tupelo, Miss., says Travis was the surprise hit of the Tupelo Elvis Festival, you know he’s good. In fact, I’ve already had calls for tickets from people who say they don’t miss a performance.”

On Nov. 4, Henry Cho – a comedian featured on Comedy Central, The Tonight Show and at least three motion pictures – will make his Andalusia debut.

“This is quite a coup for us,” Harr said of Cho’s performance. “I have seen him before, and he is amazing. Squeaky clean, but he is proof positive you can be hilariously funny and keep it clean.”

On Jan. 29, 2012, “The Queen of Bingo,” the tale of two sisters on the other side of 50, find a little fun and excitement at the local bingo game, will have goers rolling in the aisles, Harr said.

“This is a chatty, fun show done in the tradition of Milton Berle where he would dress up as a woman like in ‘Some Like It Hot,” although these two guys don’t look as good as Tony Curtis,” she said. “This show will feature a live bingo game, where some lucky audience member will win a 10-pound turkey. How can that not be funny?”

And when the “Legends of Motown” take to the stage on March 24, “It’ll be hard to sit in your seats,” Harr said.

“They do all greats and more,” she said. “These men have wonderful voices and give a wonderful performance.”

Ticket prices have changed this year, she said. Season tickets are $50 for adults for all four events; $25 for students. Individual tickets are $15 in advance and $18 at the door, she said. Family packages, which include tickets for two adults and two students, are available for $125. To purchase tickets or family packages prior to the event, visit Ansleys Place or Harold’s Furniture.

“We’re also offering a free guest ticket when you purchase a family package in the hopes we can get even more people excited about the CAC,” she said.

All performances will be held at the LBW Dixon Theater and will begin at 7 p.m., with the exception of “The Queen of Bingo,” which will begin at 2 p.m.

Harr said the Missoula Children’s Theater will also return in the spring. This year’s performance is “The Secret Garden.”

Golly – who knew goat cheese was so healthy?

On most visits to the grocery store I buy cheese. We just eat a lot of it, even though it... read more