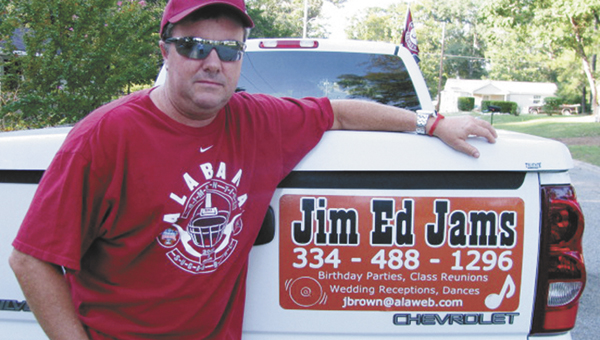 When the 1983 AHS graduate isn’t working at Carquest, where he’s been for the past 25 years, he’s helping people “get their groove on” at wedding receptions, birthday parties, you name it.

Brown is no stranger to the music scene — he’s a member of Issues, a local band,

But he said after attending a family member’s wedding reception three years ago, where they had a hired DJ, the art of spinning music looked easy to him.

“With me being in Issues part-time, I already had access to the equipment, so all I needed was the music and a computer,” he said. “So, I researched a bit and bought a computer to my likings that had plenty of space to store a pile of songs. Once I got that, then countless hours of downloading music began. That took a couple of months, I suppose, to (get me) where I felt comfortable enough in playing my first gig.”

Brown said he has a website where he lists many of the songs he has, so potential clients can see what he has to offer.

“They can pick out what they want to hear,” he said. “Or if they prefer me to pick them, that’s fine too.”

“I have a couple sets of disco lights and two fog machines that are all part of my package price,” he said. “Some folks want them; some don’t. Either way is fine.”

For more information, call or text Brown at 488-1296; e-mail him at jimedjams@yahoo.com or visit his website at www.jimedjams.com.