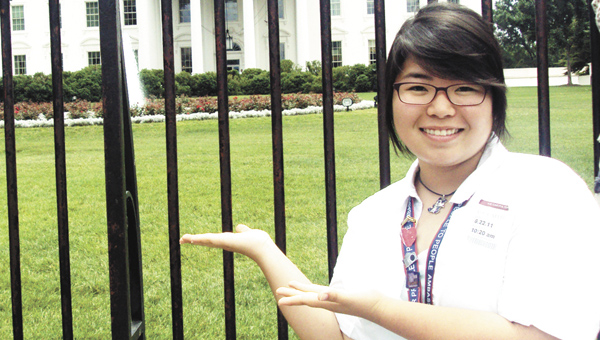 Andalusia High School junior Sung Mo got an opportunity of a lifetime this summer, as she traveled to New York and Washington, D.C., after being selected to attend the International Diplomacy Leadership Summit as part of the People to People organization founded by President Dwight D. Eisenhower.

She was the only Alabama delegate selected.

“I’ve always been interested in things that the United Nations does,” she said. “This was a great opportunity for me to start my first step toward following my dreams. I learned so much and it was unbelievable.”

“I got to see, feel and get inspired by so much,” she said. “I had the amazing opportunity to visit the Statute of Liberty, Ellis Island, Wall Street, the Former World Trade Center site and watch a Stanton Island Yankee game at New York.”

“I also had the occasion to earn some community service hours and do some volunteer work at SERRV, a fair trade organization — all in 10 days,” she said. “Those 10 days were the best times of my life. I got to see the world with my own eyes, and I became friends with so many wonderful people who live all over the world.

“My roommate, who also became my best friend, was from South Africa,” Mo said. “She was amazing. I also had the chance to hear many inspiring people speak such as the Honorable Hamid Al-Bayati, the Iraqi ambassador to the U.N.; Gillian Sorenson, the senior adviser and national advocate for the U.N.; and Ken Walsh, the chief White House correspondent for U.S. News and World Report.

Mo said her favorite part of the trip was the United Nations headquarters tour in New York.

“It has always been my dream to work for the U.N. one day, and it always felt so far away, but it was an incredible feeling when I steeped inside,” she said. “I couldn’t believe I was actually inside the building and it literally felt like a dream come true. It was just mind-blowing. No words can describe what I felt the minute I walked into the building.

“I was literally a foot away from where world leaders held their caucuses,” she said. “It was so inspiring and electrifying.”

Mo said she also was required to do a Model U.N. assignment.

“We had to come up with resolutions as U.N. representatives,” she said. “And I was assigned the country India in the economic and financial committee. As the Indian U.N. representative, I was in several caucuses with delegates of other countries.”

In order to remind herself of her time, she wears two bracelets, she said.

“One bracelet is from the Holocaust Memorial Museum, and it says ‘Erase the Hate,’ along with a prisoner number engraved on it,” she said. “This bracelet means so much to me. I was so inspired and horrified by all the things I saw at the Holocaust Museum. I don’t think I’ll ever forget the gruesome videos and pictures of all the horrible things the Nazis did.

“I wear this bracelet to inspire myself to do the right thing and to never just pass by discrimination like it’s nothing,” she said.

The other bracelet she wears says, “This Ain’t Yo Dream!”

“I had the amazing chance to listen to Harriet Turk, a motivational speaker,” she said. “She told us the truth – pursue your dreams, act on it instead of just fantasizing about it, and to always stay positive and be true to yourself. No matter what you do, there are going to be haters.”

Mo said she had an “amazing experience” this past summer.

“I would really like to thank Mrs. Charlotte Spurlin for giving me the incredible opportunity by nominating me,” she said. “She is a wonderful teacher and mentor.”

Mo is the daughter of Yeon Hong and Gyu Nam Mo.

Tax collections throughout Covington County continued to show growth through the month of July. The most recent sales tax numbers,... read more