UA’s Moore: Alabamians should be proud 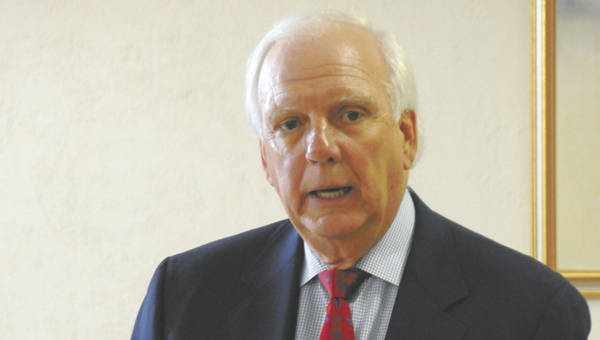 “What a treat it is for all of you and all the people of the state to live in state of Alabama,” he said. “In this state of 4 million people, there is no pro football, pro basketball, or pro baseball. The people of this state love high school athletics and college athletics. And brother, they support it.

“That’s about as pure as you can get it,” Moore said. “I hope you take good pride in the accomplishments of our universities for the last many years.”

Moore, a Dozier native, was guest speaker for the Andalusia Rotary Club Tuesday.

“All of this from a little, bitty state,” he said. “It comes from the people like yourselves who genuinely love it. They expect big things from their teams, teammates, high schools and universities.”

One of the questions he’s often asked, he said, is how starting times are set for games and why those times can’t be determined earlier.

“Three years ago, the SEC a contract with ESPN and CBS,” he said. “It’s a 15-year contract worth about $3 billion. When you take that kind of money,you give up the right to tell ’em what time you wanta start. And gladly, we do that.”

CBS has first choice for broadcasting, he said, adding that they wait to see who wins before they set the next week’s games. For instance, he said, if Alabama beats Arkansas this Saturday, the following week CBS will likely choose the Alabama-Florida game. ESPN picks second, and ESPN picks third.

He also explained “one-game stands, where we play a team just one time.”

“When we do that, we pick a neutral site,” he’s aid. “Next year, the opening game is against Michigan in Dallas, Texas, in Cowboy stadium. We won’t play another game with them.”

“When you do that, a lot of people get their feelings hurt that they can’t get tickets,” he said.

Alabama had a similar arrangement when it played Florida State at the Gator Bowl in Jacksonville several years ago, he said.

“It was a one-game stand and we had the largest crowd in the history of the stadium. What in the hell’s wrong with that?”

The crowd was bigger than when the Super Bowl was played there two years earlier, he said.

Turning to this week’s game, when Alabama will host Arkansas in its first SEC game of the 2011 season, Moore said it’s going to be a tough test for the Crimson Tide. Kick off is at 2:30 p.m.

“They have three outstanding wide receivers,” he said. “In this game, we’ve got to perform.”

Moore said the Tide needs to have an SEC win behind them when they travel to The Swamp to play Florida the following week.

Touching on other sports at the university, Moore praised the work of head Tide basketball coach Anthony Grant.

“What a difference he has made in his two years there,” Moore said. “He’s recruiting very well. The last games of last season, every game was sold out with 15,000 people in Coleman Coliseum.”

Moore said that toward the end of the season, he called Grant, who won every game he played in Tuscaloosa.

“I told him that in the past years, when we sold out Coleman Coliseum, people were coming to see Kentucky play,” Moore said. “By God, now they’re coming to see Alabama play. He needs to convey that, those players need to understand what they’re doing.”

Grant’s team worked hard for every win, he said.

“That will carry over to every recruit,” he said. “Go see them play. They might not win, but brother, they won’t disappoint you. They will compete.”

The athletic department just completed a $15 million renovation of Foster Auditorium, which is now home to the women’s basketball and volleyball programs, he said.

“It is beautiful,” he said. “We put it back the way it was when I was in school.”

He recalled President Kennedy addressing the student body after Alabama won the national championship in 1961.

“I was a student then,” he said. “So there are great memories. It still has X on the floor under the goal where George Lynn threw longest shot in the history of basketball. There is a lot of history from Foster Auditorium.”

“In 20 years, women’s golf had never been to NCAA tournament,” Moore said. “In his fourth year, he won the SEC championship. Real soon, either he or men’s golf will win a national championship. ”

Another honor for Alabama this year will be the induction of former defensive lineman Marty Lyons in the national college football hall of fame, an honor which former head coach Gene Stallings received last year.