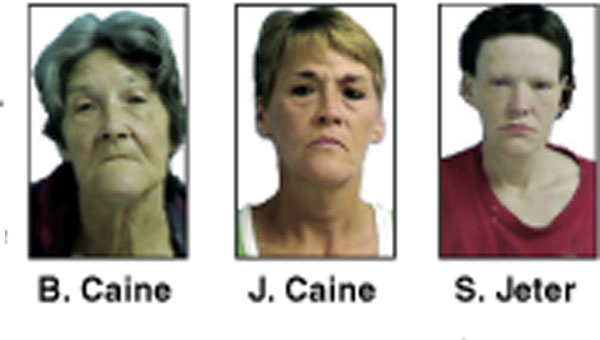 A three-day shopping spree with a stolen EBT card scored an Andalusia mom and her two daughters nearly $800 in groceries and trips to jail on Thursday.

Betty Jean Caine, 68, and her two daughters, Juanita Caine, 45, and Sheila Jeter, 37, were caught on video using the card 21 times at area merchants during the three-day span, said Sgt. Cody Warren, an investigator with the Andalusia Police Department.

He said Jeter, who is charged with nine counts of fraudulent use of a credit/debit card, identity theft and two counts of theft, allegedly stole the EBT card.

“She called the number on the back of the card and using the victim’s name and date of birth, changed the pin number,” he said. “Criminals fail to realize how things are documented in this day and time, I guess.”

Jeter is currently being held in the Covington County Jail on a $113,000 bond.

“From what we’ve determined, the three of them passed the card around and used it at several locations throughout Andalusia,” he said. “In total, the women spent $794.55 on groceries and snacks.”

Warren said the EBT cards are utilized like credit or debit cards,

“Swipe it; put in a pin number and the amount is deducted off the balance,” he said. “(An EBT card is) treated just like a debit card as far as the law is concerned. Using it without the owner’s permission is against the law.”

Betty Jean Caine is charged with seven of those 21 uses and one count of theft. She is being held in the Covington County Jail on a $73,000 bond.

Juanita Cane is charged with five of those 21 uses and one count of theft, as well. She is being held on a $53,000 bond.

Warren said his department has made multiple arrests for this type of offense this week, including that of Christopher James Hall on Tuesday.

“To the public – please pay close attention on how you use your cards – be it a credit card, debit card or EBT card,” he said. “They’re easy to lose track of, to misplace or to have stolen. As soon as you notice that it’s gone, take the appropriate steps to report it lost or stolen. It’ll protect you in the long run.”

No charges in wreck that claimed lives of Carpenter, Neal

No criminal charges are being filed in the May wreck that claimed the lives of two Red Level students. Evan... read more