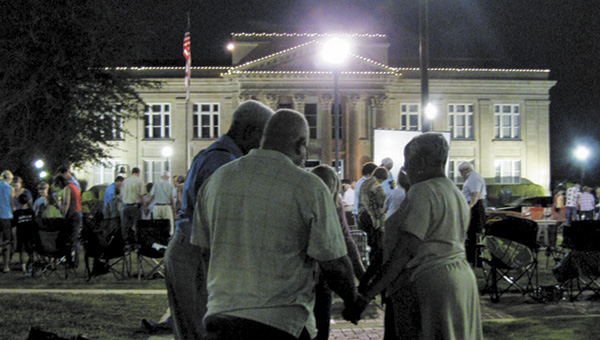 A crowd of more than 200 rallied on the Court Square Sunday for the upcoming showing of the movie “Courageous.”

Dr. Fred Karthaus of First Baptist Church described it as a “good evening to come together a great reason.”

“When we were invited to (the movie’s) prescreening in April in Mobile, we were moved by the message and the theme,” Karthaus said. “And we felt it was important and needful to have it here in Andalusia.”

The movie, which is the fourth produced by Sherwood Church, follows the likes of Facing the Giants and Fireproof. It tells the story of four fathers in law enforcement who, after going through a terrible tragedy, begin looking at their role as fathers, and ultimately begin challenging one another to fulfill God’s intention for fathers.

Merrell has issued a challenge “that each and every man in this county” attend a showing.

“It can only make us stronger,” he said. “This movie promotes the story of a healthy family by discussing the relationship between fathers and children and husbands and wives.

“If your church is not participating or you don’t attend church and want to see the show, just go to the movie theater,” he said.

The county is now beginning the final phase of the project that will allow residents to view digital property maps... read more