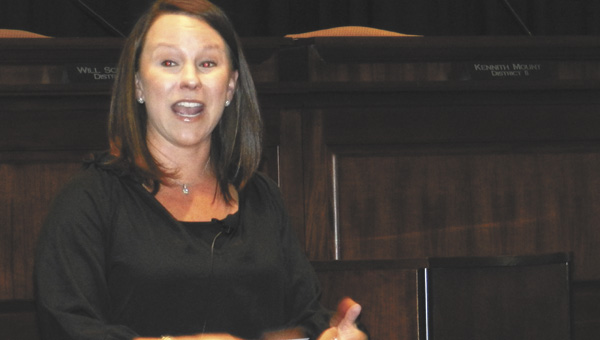 Congresswoman Martha Roby, R-Montgomery, said she came to Andalusia Tuesday to “get educated” on the issues that matter to constituents.

Andalusia Mayor Earl Johnson and others involved with industrial development gave her an earful.

Senate bill 63 would extend HUBZone certification for those that would lose the status Oct. 1, but the measure hasn’t passed the U.S. House of Representatives. Both Johnson and CCEDC board member Ed Short told Roby that the measure is critical to Covington County.

The certification, officially Historically Underutilized Business Zones, is part of a program that gives incentives for the U.S. federal government to do contracting with businesses that operate and create jobs in communities with statistically proven economic needs.

A number of local businesses will be adversely affected if the designation is not extended, Johnson said.

“It doesn’t cost anything,” Johnson said of the incentive. “All it does is give those businesses points when they are bidding on a government contract.”

Johnson said he and other officials are talking with two prospective industries now for whom having HUBZone certification would be critical in a decision to locate here.

Mark Pugh of CDG Engineering also spoke about the HUBZone certification and said it also is critical to his firm.

“Sixty-five percent of our employees live in a HUBZone,” he said, adding that having the designation puts his firm and others like it on more of a level playing field.

Roby committed to get up to speed on the issue, understand its fiscal impact, and support it if she finds it beneficial for residents in the 2nd Congressional District.

Roby spoke first to the Andalusia Rotary Club and then at a program for Andalusia Area Chamber of Commerce members at city hall. She also had questions about future BRAC (Defense Base Closure and Realignment Commission) and the effect future cuts might have on Ft. Rucker.

“Ft. Rucker is very unique in its ability to grow,” Roby said, adding that it has some unique abilities other military bases don’t have.

“There are more (defense) cuts to come, whether or not there is a formal BRAC,” she said. “We are preparing ahead of time.”

The Andalusia Ballet yesterday announced the official cast list for its December production of “Messiah.” A community chorus, accompanied by... read more