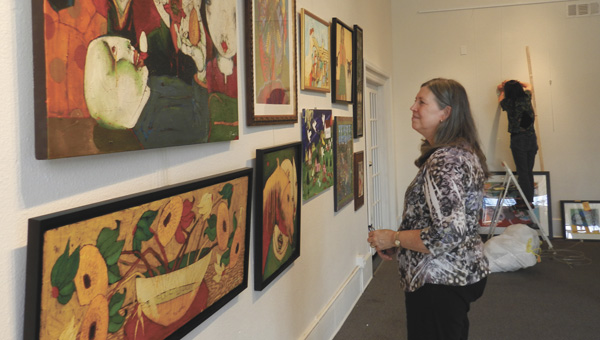 Marcia Weber looks over the contemporary folk art exhibit that opens Sunday at the Lower Alabama Arts Center. The show features 22 artists. She began her work by helping Mose T., whose work is shown below.

The work of 22 contemporary folk artists from Marcia Weber Art Objects is being presented at the Lower Alabama Arts Center this month.

“Alabama is so fortunate in that we are known for a crop of self-taught painters,” Weber said, explaining that self-taught artists aren’t “imitating academic, trained art,” in the same way that jazz and bluegrass musicians aren’t imitating classical musicians.

Weber first became a collector while teaching art in Tuscaloosa County Schools. When a little boy missed the school bus, she drove him to his home in very rural Tuscaloosa County. While trying to find her way back home, she met a woman who sold eggs and made quilts for a living. She bought a quilt that day, and soon had more than would fit in her apartment.

But it was a move to Montgomery after her husband finished graduate school and a photograph in The Washington Post that led her to understand folk art and to dedicate her life to helping self-taught artists market their work.

Mose T’s work caught the eye of then-First Lady Nancy Reagan, who said his work was her favorite in the show. When a photograph of the two of them appeared on the front page of The Post, inquiries became coming in from all over the country.

“The curators were from the Upper East, Weber recalled. “They needed someone who could speak Southern and establish rapport with artists.”

Mose T. lived just a couple of blocks from the Montgomery museum where she worked. So rather than fight rush hour traffic each day, she would take the mail she received and go and sit with Tolliver.

He couldn’t read, she said.

“So I would read him the letter and he’d say what he would paint. I would write notes on the bottom of the letter,” she said. She’d correspond with the people from across the nation who requested his work, pricing what he agreed to paint.

Later, she began working to find other self-taught artists like Tolliver. Woodie Long, whose work figures prominently in this show, was among those she met, soon marketing his work.

“Woodie’s work really struck me,” she said, adding that he understood how to get paint on a canvas with an economy of brush strokes.

The exhibit will continue until Oct. 30 by appointment, and a portion of sales benefit the LAAC.

We recently spent three days at a conference of the North American Devon Association with the title “Gourmet Beef on... read more