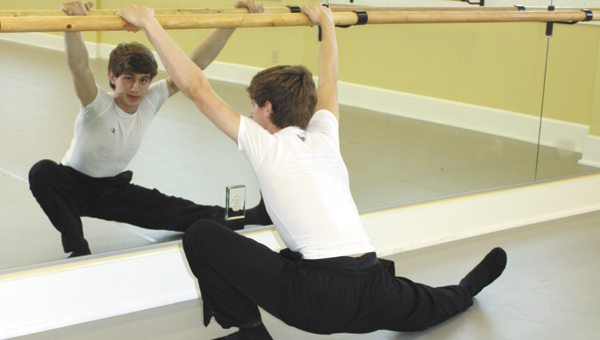 Morgan stretches before class on Friday.

To top that off, local senior Cameron Morgan has been named a National Merit semi-finalist.

“I was excited to find out I was a semi-finalist,” he said. “It was a good day.”

Morgan said he has to be driven to keep up with his schoolwork.

“You don’t have a teacher to drive you,” he said. “So, it instills work ethic in you, but you need that for anything.”

Morgan said he has already completed the application process for the honor and should find out if he’s a finalist in February.

After high school, he has his eyes on a performing arts degree with an emphasis in dance, with the possibility of getting a master’s degree in business.

Morgan began dancing four years ago, after he found out a friend had auditioned for musical theater at Florida State University, but was turned down because he had no dance experience.

“I decided if I wanted to pursue musical theater that I had to take dance,” he said. “Now, dancing is my passion.”

He has his eyes on Oklahoma, Butler and Belhaven universities, and has already received an offer for a full-ride from Oklahoma.

Before then, he’ll travel to the 4-H nationals where he’ll participate in meat judging.

Morgan has participated in the national meat competition previously, as well as the livestock team.

He is the son of Huey and Alicia Morgan.