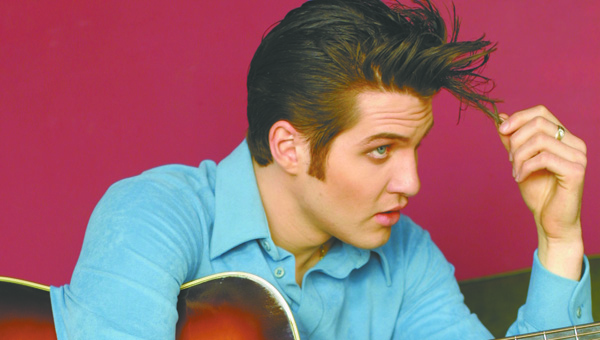 Travis LeDoyt built a career as an Elvis impersonator quite by accident.

“I had no direction after high school,” he said. “I was working in a theater and started getting in to music.

“I had seen a special on (Elvis) when I was younger and was captivated,” he said.

As his interest in music grew, he went back to the high school from which he had just graduated.

“The teacher let me sing with the chorus if I agreed to come every day,” he said.

When the school scheduled a talent show, he wanted to perform, and volunteered to entertain the crowd while the judges were out.

“I did the Elvis thing as a joke and it went over real well,” he said.

The rest, as they say, is history.

LeDoyt spends a good part of the year on the road with a three-piece band (guitar, bass and drums), restricting his shows to the hits and ambience of 1954-1962.

“Jail House Rock” and “Love Me Tender” are probably the favorites of most crowds for which he performs, he said.

“Most of the hit music came out in the 50s,” he said. “We do an hour to hour-and-a-half show. We can’t do all of the music, but we try to do a big variety. ‘Blue Suede Shoes’ and ‘Heart Break Hotel’ are in there, too.”

And they perform some music that didn’t top the charts.

“We don’t want to overshadow the most popular hits, but we throw in to keep it interesting to us,” he said.

The most unusual place he’s ever performed was in China in 2006. In addition to being a difficult place to reach, the audience was very reserved.

“At first I thought it was the language barrier,” he said. “But there, it’s considered disrespectful to act up. We were doing two sets, and at the break, the promoter went out and told them it was OK to let loose. The second set was much better.

“It was scary getting in to the country, though,” he said. “Customs and immigration were tough.”

And that’s one of the best things about his career choice, he said.

“I’ve gotten to travel to places I would have never gone. It’s been a blessing for me.”

All in all, it’s been an unusual career.

“I’m not too lost in it,” he said. “Some (impersonators) can’t separate from the show and get lost in it. If you saw me when I wasn’t working, you wouldn’t know what I did for a living.”

He will take the stage Thursday t at 7 p.m. at the LBWCC Dixon Center.