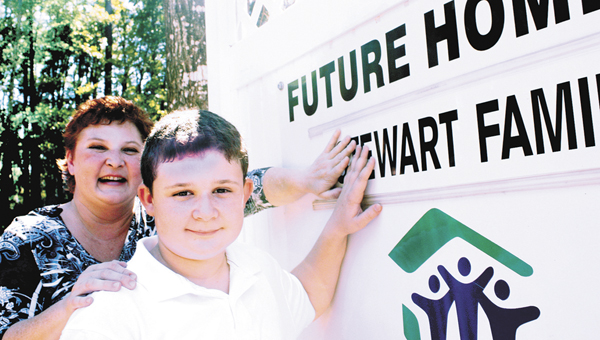 Sherrie Stewart and her son, Noah Gillespie, slide their name into the spot designating them as the newest Habitat family.

The excitement was evident in Sherrie Stewart’s shaking hands and quick breaths as people began arriving for Wednesday’s Habitat for Humanity groundbreaking ceremony in Florala.

Stewart, along with her son 12-year-old Nash Gillespie, is the third Habitat family chosen for Covington County. The Cypress Street build is the first in the Florala area.

“My stomach is doing flip-flops and my heart is beating 10,000 mph,” Stewart said. “I can’t believe this is happening.”

Stewart was thinking along those same lines when, more than a year ago, Habitat’s family coordinator Denise Brooks called with the news the family would be the next Habitat recipient.

“It took me a while to convince her I was telling the truth,” Brooks said of the phone call. “She kept saying, ‘This has got to be a joke. You can’t be serious.’”

What was “no joke” was the story of the living conditions that the family, which also includes Stewart’s 15-year-old son, faced every day while living in the back of Stewart’s shop, Dixie Signs and Graphics.

“The shower is in the living room, and all the walls are made of OSB board – none of which are full walls, either,” Stewart said. “The AC unit is in my son’s room. We painted it camo, trying to make the best of the situation. There’s no windows, so if you turned off the lights, you couldn’t tell if it was day or night out.”

Still, Stewart said she didn’t want people to feel sorry for her or her family.

“We’re blessed,” she said. “We’ve got a roof over our heads now, and all these wonderful people are here to make sure we have a new house. It’s overwhelming. Words can’t describe what I’m feeling right now.”

Stewart has completed 100 of the required 300 hours of sweat equity. She worked to lay insulation in the Andalusia Habitat home of Bessie Marshall.

She has also undergone all the necessary steps to become a Habitat homeowner such as financial counseling.

At one point in the afternoon, Stewart was overcome with emotion as the crowd grew in numbers.

“Now, I can tell this is really happening,” she said. “I can hardly breathe. You know, Habitat doesn’t just build homes. They build new lives. I can’t wait to get started on ours. I’m walking on sunshine.”