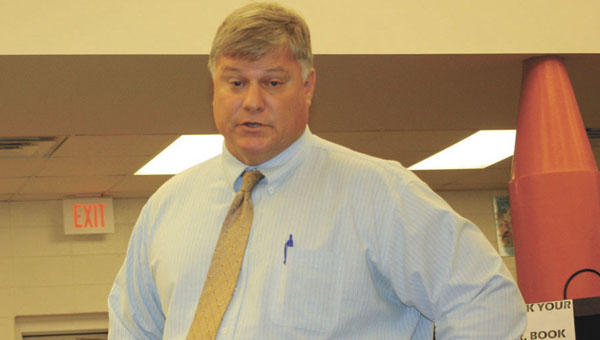 A group of 20 citizens and parents, including many alumni of the former Woodson High School, voiced their questions and concerns about the Andalusia City School system’s plan to close the middle school.

Sammy Glover wanted to know what initiated the discussion to close the middle school campus.

“First the fact that we began to look at academic offerings,” Watson said. “There was concern given due to the economy and budgetary trends. We wanted to try to figure out ways to be more efficient, and keep as many programs as we can. We have to get leaner and tighter.”

Additionally, the AMS building has some infrastructure issues such as enough wiring and power outlets, Watson said.

Glover also wanted to know how much it would save the school system.

Watson said that when the school system approached the state school system to see how much money it would save to consolidate the three campuses into two, they were told in the neighborhood of $500,000.

Glover was also concerned about the cost of building the new wings.

“What is the projected cost of these new buildings,” he asked.

“I have reason to believe somewhere around $3.5 million to $4 million,” Watson said.

Ethel Robertson asked if it wouldn’t be easier and more cost efficient to put in new electrical outlets.

“Sure we can put in plugs at the middle school,” Watson said. “But the wiring will be outside the walls. If we have new construction they will be put inside the walls.”

Robertson also wanted to know if there were any “ulterior motives” behind the closing AMS.

Watson said there were none, and that they would move the board of education to AMS in order to preserve the history of the former Woodson High School.

“All buildings are traditionally useless, unless they are memorialized,” he said. “We would rename the building to include the Woodson name.”

Watson proposed that a heritage room similar to the one at AHS could be set up at the location in honor of Woodson High School.

Ann Shakespeare said she couldn’t grasp “what you all are trying to do.”

“You will still have utilities and people there,” she said. “It’s still going to be functioning, and you will have the same cost, maintenance, lunchroom, etc. I don’t see the savings.”

“So there is the benefit of not running all heating and cooling at the same time,” he said. “It’s really important that someone move in because of the preservation.”

Shakespeare said she’d love for the sixth through eighth graders to stay there.

Glover told Watson he didn’t want the board to be pressured by a bond firm’s proposal to help the school system get the money immediately for the construction.

At the last board meeting, a pair from Merchant’s Capital presented four plans to the school board for consideration to help them capitalize on interest and receive upward of $5 million to help fund this project.

The board is scheduled to reach a decision at its Monday night board meeting.

“I caution the board not to rush into anything until they have all the answers,” he said.

A big concern among those gathered at was intermingling of younger students with older students.

Watson said that one reason for the move was to have all of the elementary units and all of the secondary units together under one roof.

For example, AHS history teacher Perry Dillard is certified to teach high school history as well as seventh and eighth grade history. Therefore, if needed, he would be able to teacher seventh, eighth and ninth grade history.

Shakespeare was concerned about seventh and eighth grade students having to go to the high school for classes.

“We would have the teacher go to the middle school wing,” Watson said. “Think about it this way. At AES, we have three schools in one. We have three different wings. They don’t see each other. I see no reason to believe we couldn’t do that here. We’ll certainly do everything in our power to make sure those in the seventh and eighth grade stay separate.”

Shakespeare said being a mobile teacher is difficult.

Additionally, Watson suggested there might be a hot bar and commons areas for kindergarteners at the elementary school and a multipurpose eating area for seventh and eighth graders at the high school.

Ideas for band and extra curricular activities still have to be panned out, Watson said, but the intentions are to keep everything that the middle school currently has.

Mattie Freeney wanted to know if the project was a “done deal.”

“I don’t think we would be having this meeting if it were,” Watson said.

“We set up committees,” he said. “We went all over the state looking at what we wanted to become. We talked with the administration down to the janitorial staff on how things worked. We moved for input from the community. When it was over with even those who were opposed realized it was a wise decision. I ask you to do the same thing.”

“I hope – we have two board members here – you’re not just listening to us, but that you’re hearing us,” Glover said. “I hope these comments are discussed in an open school board meeting. I’m interested to know how each board member responded. I hope this wasn’t just to fulfill your promise. If the board simply is going proceed, I think it’s a slap in the face to (Watson) and to us.”

Only two of the city’s five school board members, David McCalman and Joe Nix, attended the meeting. Absent were board Chairman Bill King, Amy Dugger and David Bryant.

Watson said if the project were a go today, it would take approximately two-and-a-half to three years for the project to be completed.

Not everyone was against the measure by the end of the night.

Mary Lynn Edgar said she came to the meeting expecting to voice all of her opposition for the idea, but said she thinks it could be a good idea.

She also said she was “surprised that all the board isn’t here.”