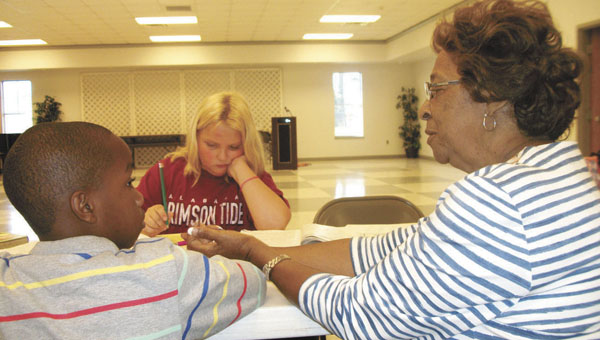 Statistics released this week in the annual Kids Count report show interesting facts about Covington County. There are fewer first graders being held back, the number of children living in poverty is down, as were births to unwed mothers. On the flip side, the county’s graduation rate dropped by more than 3 percent from last year, fewer pregnant teens are receiving prenatal care, and the number of abused children has jumped by 2.5 percent.

Lewis said the cause of each one of those factors is traced back to education – especially the graduation rate.

“Kindergarteners are expected to know their letters and numbers, and students in first grade are expected to be reading not long after starting school (in August),” Lewis said. “Those two facts alone show how important it is to get a good foundation built in education.

“If those don’t have that foundation or those skills, they’re not going to succeed in life,” she said. “And that’s why we’re here.”

The “we” Lewis speaks of call themselves CHARMS, or Citizens Helping Children Achieve Reading and Math Skills. Every Tuesday and Thursday, between 3:30 p.m. and 5:30 p.m., Lewis and other educators (both retired and currently teaching) volunteer their time tutoring after school at Bright Beginnings Preschool for students in the first through fifth grades.

Recently, Lewis, Sharon Daniels and Belita Green were seated at folding tables surrounded by children and their homework. One worked with the younger children on letter recognition and sounds. Another worked with second and third graders. Lewis was tasked with assisting the older children with math homework.

“A group of us, I don’t know 10 or 12 or so, all educators, started talking amongst ourselves,” Lewis said, talking about the organization of CHARMS. “I told them about one day in church. I teach Sunday School, but I don’t teach the Bible every day. We work on reading – in Sunday School. One day, my preacher asked why, and I told him, ‘If a child can’t read a Bible, what good is it?’ And that’s how we got started.”

Now, volunteers bring copied worksheets from home for students to practice, as well as books.

“We try to match the skills that they’re learning in school,” Lewis said. “One layer at a time, we build on that to make them successful.”

The tutoring is free and open to anyone willing to bring the child to the preschool. At present, attendance ranges between 12-14, and Lewis said they’d like to keep the group around 20.

Lewis and the others said they hope the program has a long-lasting effect, especially on the graduation rate, which according to the Kids Count data, placed at 65 percent of high school students.

“Like we said, it all comes back to that foundation,” she said. “If they have those skills, especially in math and reading, they will be successful in school – and that means success in the long term, hopefully.”

And superintendents of the local school systems agreed. This year, Opp High School and Andalusia High School failed to make Adequate Yearly Progress, or AYP, because of graduation rates – which were 83 percent and 76 respectively.

The Covington County School System had a 91 percent graduation rate.

Gas prices down nearly a quarter

Gas prices are on the decline, and local residents could be getting slight relief in their pocketbooks, but prices are... read more