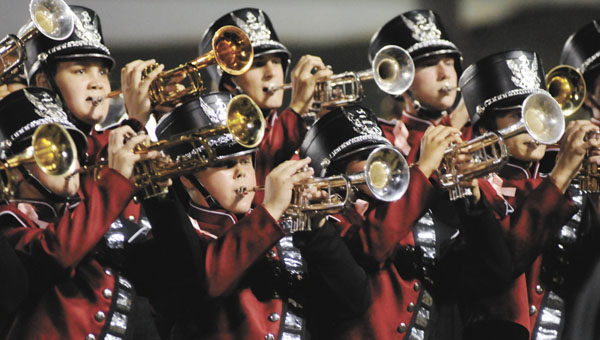 Seven years ago, there were 90 members of the band. This year, 140 are marching, representing a third of the student body. The number is expected to be even bigger next year.

“We’re the second largest band that I know of in our district, which stretches from Conecuh County to Dothan and up to Barbour County. Enterprise marches about 160, and they used to march 250.”

The growth, he said, has a lot to do with the tradition.

“A lot of it is the City of Andalusia,” he said. “There are so many people who were in the band program and want their kids to be a part of it.”

While the growth is good, it also adds pressure to members of the Band Boosters to raise money. With its fundraisers, the organization pays for the band’s travel to away games and band contests, and buys uniforms, instruments and equipment. With the exception of a few donations, members of the organization earn this money selling ads for the football program, selling football programs, selling concessions during home games, and by hosting the annual A-Town Invitational.

It’s a routine David Williams knows well. The current president of the band boosters estimates he’s spent a minimum of 12 years working with the group.

“My children have all been in the band, and Kathryn is 10 years behind the other two,” he said, referring to this year’s majorette captain, Kathryn Williams. “We I started back, it was my first band meeting in a while.”

His intentions were to be a worker bee. Instead, he’s in his third year as president, and sees a tremendous task before the organization. In addition to this year’s operational costs, the group needs to raise the funds to buy additional instruments and uniforms to accommodate the growing number of students participating. (See accompanying list).

Shellhouse explained that the group buys some of the instruments that are higher priced.

“If you were a drummer, you’d have to buy three sets of drums to be in the high school band,” he said. “Now, we only have them buy a snare for middle school band and we supply all the marching percussion. Baritones and trombones are supplied at the high school level, so we can make sure we playing on the best quality instruments.”

Given the current needs, Williams convinced band boosters to bring back a fundraiser that has been successful in the past. The group is selling $50 chances to win $3,000, $2000 or $1,000.

“We printed 400 tickets and hope to sell them all,” Williams said. The drawing will be this coming Friday, Oct. 14, at the Bulldogs’ last home game for the season.

Earlier this week, Williams and Shellhouse approached the Andalusia City Council for help and received $5,000. They plan to make similar pitches to other organizations and civic groups.

To support the AHS Band Boosters’ current fundraiser, contact David Williams at 488.0447 or email him at dwilliams@cdge.com.

Shown are Johnny and Kristi Powell. Johnny has been diagnosed with a rare form of gall bladder cancer. “It’s not... read more