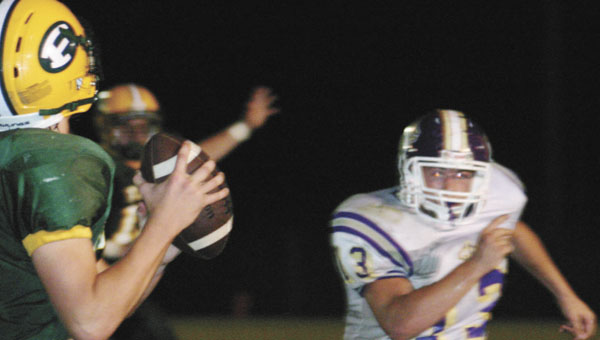 Florala's Austin McNeil tries for a pass, but gets some pressure from a Geneva County player. | Stephanie Nelson/Star-News

It seemed that nothing could go right Friday night for the Florala Wildcats, who lost their homecoming game to the Geneva County Bulldogs, 41-19.

Less than two minutes into play, the Bulldogs were on the scoreboard.

The touchdown was the first in a rapid succession for Geneva County, and by early in the second, the Bulldogs were up 21-0. Then, a handoff to the Bulldog’s Darren White connected for a 60-yard touchdown with 10:24 left in the half. The point after attempt was blocked by Florala’s Jonathan Burleson, and the Bulldogs led 27-0.

Then, with 9:10 left in the half, Florala’s Desmond Smiley broke free with a sweep around the right for a 61-yard touchdown; however, an illegal block in the backfield penalty brought the ball back to the 7-yard line.

Geneva County then scored another touchdown when the Bulldogs returned a punt for a 62-yard touchdown.

For a while, it looked like Smiley’s run was going to be Florala’s only trip into the end zone before halftime; however, with 56-seconds left, the Wildcats scored, bringing the score to 35-6 at the half.

The Wildcats tried valiantly to rally in the second half, but their attempts were enough to achieve a win. Geneva County once again ran up the scoreboard in third, but a blocked PAT brought the score to 41-6.

Florala quarterback Austin McNeil connected twice in the third quarter – once to Burleson for a 32-yard run and then to Cole Jackson for a 29-yard run, which helped the Wildcats score a touchdown and then the PAT.

In the fourth quarter, a Geneva County fumble was recovered by Smiley. McNeil again drove the ball downfield, connecting with Jackson for a 14-yard run and then to Ryan Jordan for completion in the end zone. The PAT was no good, but the Wildcats were on the scoreboard again, ending the scoring at 41-19.

Coach Justin Jones said he was proud of the play seen in the second half.

“Ryan Jordan ran the ball; Austin McNeil threw very well, but the fact of it is – we’ve got to be a four-quarter ball team.”