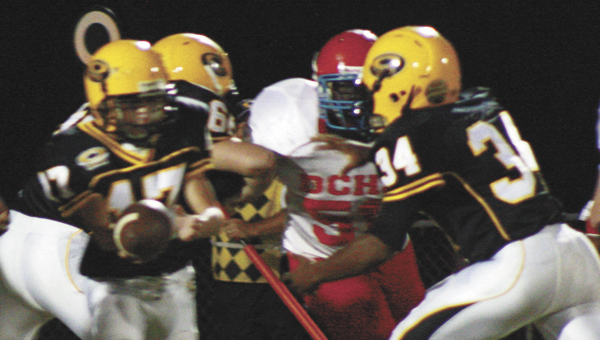 The Opp Bobcats secured a spot in the Class 3A state playoffs last night with a 42-12 homecoming win over Dale County.

Opp’s Myeke Boyd was first to score with a 1-yard run with just over seven minutes left in the first quarter. The PAT was no good.

On a quarterback keeper, TJ Register ran in, putting the Bobcats up 14-0.

Register completed a 46-yard pass to Thomas Weed with 4:46 left in the first, and the PAT was good.

The Warriors capitalized on an Opp fumble to get on the board, but the Bobcats blocked the extra point, making the score 21-6.

Opp’s Devin Davis scored with 31 seconds left in the first from 8 yards out, and Dylan Northey’s extra point was good, putting the Bobcats up 28-6 at the end of the first quarter.

Davis scored again with a 29-yard run and Northey’s extra point was good, making it 35-6 at the half.

Opp struck out again with just over 11 minutes left in the third quarter, with a 49-yard touchdown run from Ontario Jones, and Northey’s PAT was good, making it 42-6.

Dale County’s quarterback, Colby Horn, scored on a quarterback keeper from 2 yards out to up the Warriors’ score to 12.

Horn’s two-point conversion attempt was no good, making the final 42-12.

Opp head coach Jack Whigham said this week was “a long one with homecoming.”

“I thought we played well,” he said. “We got everyone in the game, but we still have a long way to go.”

Whigham said he challenged the kids this week, and he was pleased with the effort, but they still have more to do.

The Bobcats will hit the road next week to take on the Abbeville Yellow Jackets in region play.