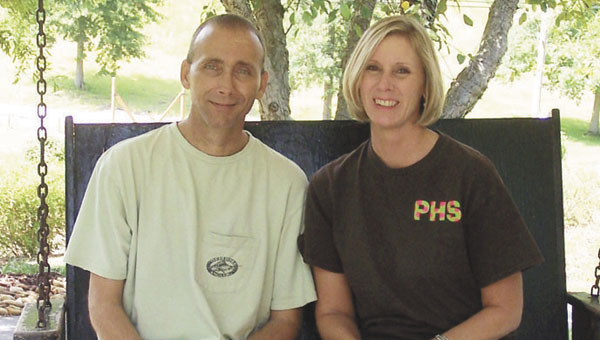 Shown are Johnny and Kristi Powell. Johnny has been diagnosed with a rare form of gall bladder cancer.

Those might be strange words coming from someone diagnosed with a rare form of gall bladder cancer, but it’s the truth, according to Johnny and Kristi Powell.

On the flip side, it’s also the basis behind an upcoming fundraiser sponsored by the “Running for a Reason” group to help the family with medical expenses.

Last Thanksgiving, Johnny was ready to celebrate the holiday season but was suddenly hit with mild reflux. By Monday, his family began commenting about the yellow color of his skin, which prompted an emergency trip to the doctor.

Johnny’s sister-in-law, Dr. Gabrielle Baldwin, said that was when doctors found a “plaque-like area” in his intestine. By Dec. 9, the family got the news – cancer.

“It was a large mass in his gall bladder,” she said. “From there, it got worse.”

Doctors operated, and at one point, Johnny, a lifelong farmer, nearly died, she said.

“He and Kristi (her sister) will tell you in a heartbeat – Johnny had a personal and significant encounter with the Lord right after that, and that’s what got him through it,” she said.

“There’s this song, ‘No Matter What’ that talks about how nothing touches us that doesn’t go through His hands, and we know that no matter what God will see us through this,” she said. “We all know that Johnny’s battle is not in vain. Something will come from this. He firmly believes that that this is happening to us so that God can be revealed through our experience.

“Maybe someone will hear about it or read about it and it might lead them to know Christ or renew their faith in God or heal relationships between people,” she said. “Doctors said they only gave him a year or so to live. He said, ‘They just don’t know who I know,’ which I think is a true testament to his faith.”

One of the Powell’s favorite scriptures is Isaiah 40:31, “But those who hope in the Lord will renew their strength. They will soar on wings like eagles; they will run and not grow weary, they will walk and not be faint.”

Johnny has completed his radiation and is now undergoing IV chemotherapy, which he will have to take for the rest of his life. However, he has been unable to work since his diagnosis, and it’s unlikely he will be able to return to work.

“There’s no cure,” Baldwin said. “As a doctor, I know what he and Kristi are facing, and that’s hard to watch, but they don’t like to dwell on the negative things with his illness. They dwell on what God has given them – each precious day, and that’s inspiring.”

Others also agree it’s inspiring to see how the Pleasant Home and Andalusia communities have come together to support the family. Leigh Newby, organizer of “Running for a Reason,” said the group, which most recently held a benefit for the Kelley family in Pleasant Home, opted to do a football-themed fundraiser for the family on Oct. 22 at the PHS stadium from 3 p.m. until 5 p.m.

“It’s going to be a great afternoon with free musical entertainment featuring local talent and a Christian band,” she said. “For a small entry fee, you can show off your athletic skills in the 40-yard dash, the field goal kick or the punt, pass and kick contest. It’s a fun way to spend an October afternoon while helping a family who needs it.”

For a $5 entry fee, the kids can enjoy a bounce house, rock wall and slide sponsored by the school’s Peer Helpers Club, she said. Lunch plates will also be sold for $5 each and include barbeque, baked beans, David’s coleslaw, dessert and a drink.

All proceeds will go to Johnny’s medical fund, she said.

“Most of the time when something like this happens, it’s hard for friends to find something to do to help,” Baldwin said. “This fundraiser is a perfect opportunity.”

Kristi sends out email updates on Johnny’s recovery. To be placed on their email list, email her at kristi.powell@cov.k12.al.us.