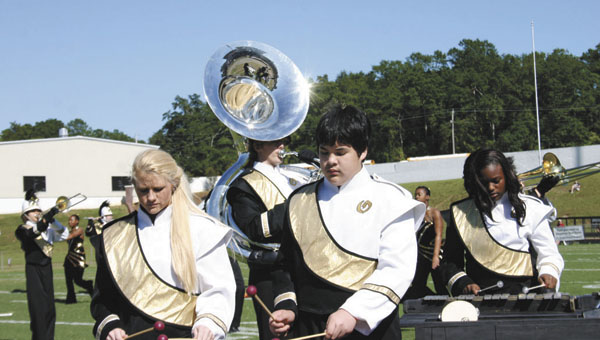 Opp High School’s band will play an exhibition show at the end of the Little Big Horn competition on Saturday.

This weekend, some 4,000 people will make their way to Opp for the annual Little Big Horn Band competition, bringing with them a stream of sales tax revenue and business for the city.

The crowd is second only to the Rattlesnake Rodeo weekend for Opp.

“All the bands bring with them parents and other supporters,” he said. “They come in and patronize our restaurants, stores and gas stations, in turn bringing a big weekend in sales tax revenue. We are excited about the weekend. ”

Some 21 bands will be competing this Saturday in Opp’s Little Big Horn Marching Band competition.

“This is our biggest fundraiser of the year,” he said. “We are in our 31st year.”

In years past, Hughey said the event had drawn a standing-room only crowd.

Hughey said gates open at 11 a.m., and the first band will take the field at noon.

The University of Mobile Ram Corps will perform in exhibition during supper break.

Andalusia will take the field at 8:20 p.m., and Opp’s Black and Gold Marching Band will perform its exhibition at 9 p.m., followed by awards at 9:15 p.m.

Admission is $6, which includes an armband.

“We will also have T-shirts and other souvenirs,” he said. “We will have a professional multi-camera DVD for sale, as well as concessions.”

An emaciated raccoon that was behaving erratically and was killed at 2000 Lindsey Bridge Road this past weekend was rabid,... read more