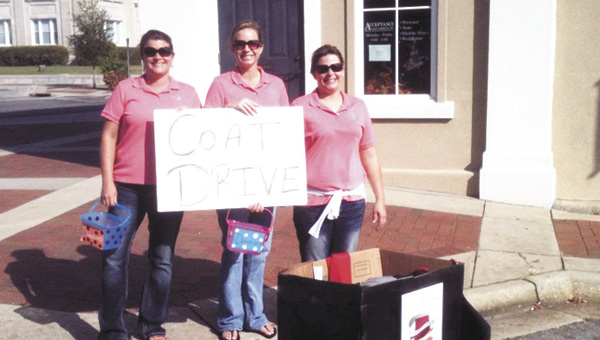 Andalusia’s Junior Service League would like to send a truckload of new and gently-used coats to victims of April’s tornadoes.

The group is in the midst of a coat drive to keep tornado victims warm as temperatures begin to cool in Alabama. Through an event held on the square this past Saturday, contributions, and collection points around town, they’ve collected or purchased more than 150 coats so far.

Sandy Neal of JSL said the idea came when she was talking with her mother. Neal called the Toomer’s for Tuscaloosa organization, which provides material support and relief to the residents of the South and Mid-South affected by the April, May and August storms of 2011.

“It was kind of funny discussing winter coats in the middle of September when it is still in the upper 90s…but you can’t wait until it is cold to have a coat drive,” Neal said.

The Toomer’s organization confirmed there was a definite need, and the local club got busy.

“A lot of victims had insurance on their homes, but very few had enough insurance to cover the contents of their homes, so there are many needs these folks still have,” Neal said. “This is just one need that we can help our Alabama neighbors fulfill.”

“We stood on the curb and met people at the car to get their coats, so the public would not have to park and get out. It was amazing. We had one couple stop on the square and ask what we were doing, I explained it to her and she took the jacket she had own her body and handed it to me,” Graham said. “She had been to Hackleburg shortly after the deadly tornado to help and she was forever changed. She wanted me to have that coat on her body, she said it would help someone that had nothing left to stay warm this winter.”

“We hope to fill the boxes at each of our locations this coming week as many times as possible,” Neal said. “We truly would love to send a truck full of coats to the Toomer’s for Tuscaloosa warehouse. We will have the coats sorted and sized so that when they arrive at the warehouse all they will have to do is hang them on racks for families to come and take what they need.”

Andalusia City Schools Superintendent Ted Watson said Tuesday all the logistics haven’t been worked out when it comes to closing... read more