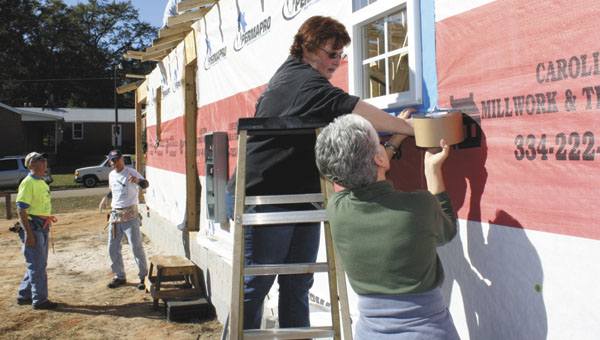 Workers will be needed for next week’s Habitat for Humanity blitz. | Courtesy photo

Construction issues have delayed the upcoming Habitat for Humanity Build in Florala by one week.

The build was originally set to kick off on Fri., Oct. 21. The date has now been pushed back to Fri., Oct. 28, to allow for time to make the site ready for the build.

“We have hit a snag with getting power to the site,” Pancake said. “Alabama Power is backed up on their service installation, and our plumber had surgery earlier this week, so we won’t be able to lay in the plumbing in the foundation until Monday.”

Pancake said other than those two issues, work is progressing nicely at the site. Earlier this week, work was done to finish the foundation’s footings.

Pancake said volunteers and donations are still needed for the upcoming build.

Those wishing to make monetary donations should mail them to: Covington County Chapter of Habitat for Humanity, PO Box 1034 Andalusia, AL 36420. Funds can be designated for the Florala build.

Those wishing to volunteer for the Florala build can call 334-222-0827 and leave a message.

Also, Pancake said John Croft, with the church relations committee, is continuing to line up transportation to and from the site and help with lunches for volunteers and onsite registration.

Shown is an artist’s rendering of the new facility. For 20 years, dialysis patients have had the convenience of receing... read more