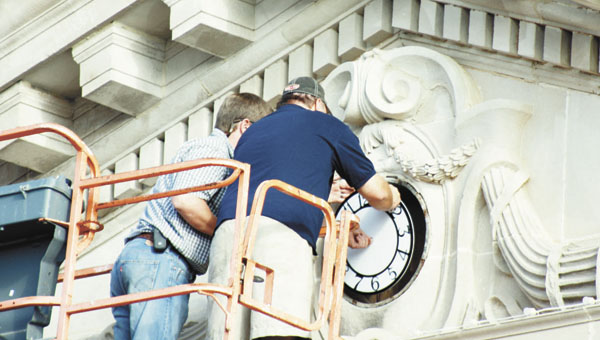 Many in recent years have bemoaned the absence of a clock on the Covington County Courthouse.

Where once the round opening sat empty, now rests an illuminated dial, illustrating the passage of time.

County Administrator Brenda Petty said she’s attempted to research the fate of the other clock, which was removed more than 20 years ago for repairs.

“No one seems to know any more than I do,” Petty said; however, a good number of local historians have their own version of the tale.

Sue Bass Wilson, president of the Covington Historical Society, once said previous courthouse clocks chimed on the hour, letting residents know exactly what time it was.

While the new clock doesn’t sound the hour, it will be gently lighted at night by LED lights.

Replacing the clock has been a long process, Petty said.

“We started trying to get a replacement clock installed before the Andalusia Homecoming event last November; however, we could only locate one vendor that installs such a clock, and he was located near Atlanta,” she said. “He couldn’t meet our deadline, so we put the issue on hold for a few months. It came to the forefront again when we renovated the courthouse.”

Petty said it was a very expensive project – $2,795 for the clock, and the county was required to provide a lift for the installation.

Thursday, Chuck White and Joe Freeman of White’s Clock Repair and Carillon of Sharpburg, Ga., worked for more than three hours on the installation.

The new motorized clock sits in a blocked bracket, with the same glass front that covered the first clock.