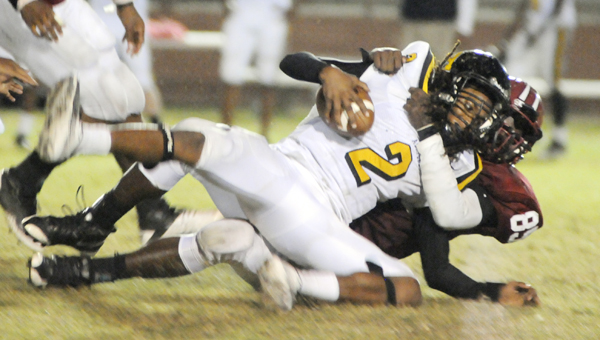 Andalusia clinched the No. 1 spot in its region Friday night with a 31-22 win over Ashford.

It was a win that didn’t come as easily as the score made it look.

“I’m happy for the win, but we have a lot of little things to work on and execute,” head coach Brian Seymore said. They (Ashford) caused us a lot of problems with their different defensive schemes.”

The Bulldog defense took advantage of Ashford’s early snapping troubles when the third snap of their first possession was a low snap that went out of the back of the end zone for a safety, giving Andalusia an early 2-0 lead.

The Andalusia offense took over, and Ralph Sims notched his first of two touchdowns with a 15-yard run that gave Andalusia a 9-0 lead.

Ashford answered quickly when Ladavion Williams sliced his way through the Andalusia defense for a 37-yard touchdown run. After a successful 2-point conversion the Yellowjackets trimmed Andalusia’s lead to one.

The Bulldogs responded with a four-minute, eight play drive that was capped off with a Jacard Townsend when he leapt over the line from 1-yard out. A successful 2- point conversion cushioned the lead,17-8.

Andalusia took possession again on a fumble recovery, and put together an impressive series. C.P. Rogers moved the Bulldogs to the Ashfod-15 on an impressive, 31-yeard keeper. Sims added his second touchdown a few plays later. The 2- point conversion was good, and the home team stretched the lead to 25-8 at the half.

After a scoreless third quarter for both squads Ashford put together a strong drive to start the fourth, scoring from 17-yards out on a pass from Octavius Snell to Deonne Jenkins, narrowing the score to 25-14.

Andalusia answered when C.P. Rogers hit Townsend on a swing pass and Townsend bulldozed his way through an Ashford defender for the touchdown.

But Ashford was not about to go away quietly. Davonta Williams took the ensuing kickoff 70 yards for the score, trimming the lead to 31-22.

Rogers finished the game with 70 yards on 13 carries. Sims rushed eight times for 65 yards and pair of touchdowns. Townsend finished with 57 yards on 10 carries with one rushing touchdown and one receiving. Townsend also had nine tackles and an interception.

An ankle injury sent Andalusia center Quincy Thomas to the emergency room in the first half. His status was not available when The Star-News went to press.

Now 8-0, the Bulldogs travel to Headland next Friday for the ninth regular-season game.