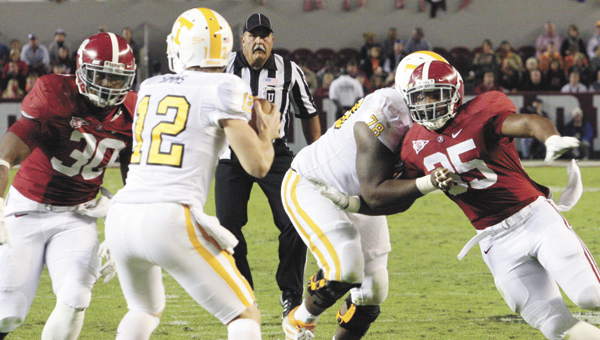 Alabama junior linebacker and former Andalusia stand-out Nico Johnson’s six tackles and an almost interception against Tennessee last week is little in comparison to what he’s done for the Crimson Tide this season.

Johnson said in the game against Tennessee, where he had three solo tackles and three assisted tackles, from an individual standpoint that he did “all right.”

“We got out to a slow start, and we’ve got to correct that,” he said. “We’re going to start back tomorrow (today) and go from there. We’ve got to execute better in the first half.”

The second-ranked Crimson Tide has a by-week this week before it faces top-ranked LSU on Sat., Nov. 5, in what many sports enthusiasts consider to be the BCS National Championship semifinal.

In addition to his six tackles against the Volunteers, Johnson tipped a pass that ended up in the hands of fellow linebacker Dont’a Hightower.

With his success on the field this season, Johnson said he’s able to go into games and have fun, “being comfortable and relaxed.”

Today, Johnson said the team will be back at practice after having Monday off because of the by-week. He said the team hasn’t started working on LSU, and added this week will be dedicated more to fundamentals.

“That’s what we’ll do all week, and go from there,” he said.

Of LSU, Johnson said getting off to good start against the Tigers is essential.

“I mean, they’re a good team,” Johnson said. “They’re No. 1 for a reason. I feel like we can’t come out as a team like we have done multiple times as slow. They’re good enough to capitalize on that.

“It’s going to be an intense game,” he said.

The “slow” part to which Johnson was referring is Alabama’s first-half production this season. So far, the Crimson Tide has outscored their opponents 139-33 in the first half, compared to their second half production of 176-22.

Johnson said the main key to the defense this season has been finishing.

“It was like the Auburn game and all of the games we’ve lost and we won,” he said. “We didn’t finish like we’re supposed to. Going through that last year, it’s motivated us to finish strong. That’s the main thing.”

The Andalusia PeeWee Bulldogs just keep winning. With a 32-6 win over the Baker Gators on Saturday afternoon, the Bulldogs... read more