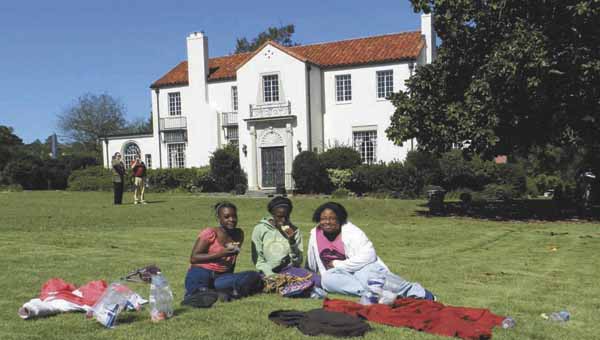 Springdale, which was purchased last year by the City of Andalusia was added to the register as well. AHS freshmen enjoy lunch on the lawn during a tour last week.

Church Street School, Springdale, and the Alabama Textile Products Corp.(ALATEX) office building were added to the register in October.

Church Street School, recently renovated as the Church Street Cultural Arts Center and now the home to the Andalusia Ballet, is the oldest of the three buildings. The school, built in 1923, served as the city high school until about 1941, and was an elementary school until 2000.

Architects Frederick Ausfield and Carl C. Cooper designed the school at the request of the Andalusia Development Co. during the administration of Mayor Trammell Henderson.

The AHC said the Church Street School is an excellent example of Mission Revival architecture.

Springdale was built in 1937 as the home of John G. Scherf. Scherf founded the Alabama Textile Products Corp. and also served four terms as mayor, and made major contributions to the city’s economic growth.

Springdale sits on four acres. The estate includes the main house, a large four-car garage, a guesthouse, a small lake, several fountains, and beautifully landscaped lawns. The City of Andalusia now owns it.

The Alabama Textile Products Corporation (ALATEX) office building is a good example of an early 20th century manufacturing company. Founded in 1923 as the ANDALA Co., it was organized primarily as a contract manufacturer for Arrow Shirts, a division of Cluett, Peabody and Co.

The office building is currently being renovated for use by the Andalusia Area Chamber of Commerce. It was the ALATEX corporate headquarters until 1985.

John Greene, communications coordinator for the Alabama Historical Commission, said the buildings were nominated by the City of Andalusia. Nominations must be documented with photographs and historical facts about the properties, he said.

“These are really good examples,” he said of the Andalusia structures added to the register this month.

The AHC considers the notable historic properties in this register to be particularly worthy of preservation and appreciation, and therefore deserving of this special recognition.

The designation is honorary and carries no restrictions on property and offers no financial incentives. However, properties on the register are eligible for state historic markers if funding is available for them.