Tigers in it to win it 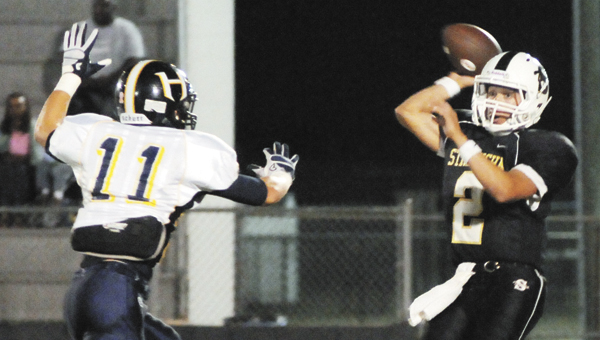 Straughn’s Zack Turvin makes a pass under pressure during the Headland game on Oct. 14. | Andrew Garner/Star-News

Straughn will play host to Daleville this Thursday night in its final regular season game, and the Tigers are playing for one thing — to win out.

Daleville enters the contest with a 4-5 overall record and senior running back and Troy-commit Brandon Burks.

Earlier this season, Burks won Prep Spotlight honors from the Alabama High School Athletic Association for his seven-touchdown opening-game against Bullock County. The Warhawks went on to win that game 53-23, where Burks rushed for 411 yards.

“It’s something somebody else has recognized as well,” he said. “They love being in the ‘I’-one play, and run toss-sweeps in others. Then, the next snap they’re in gun, and handing the ball to him. The quarterback (Richard Jones) does a good job. He’s a two-year starter. He’s their strength in that position.”

Additionally, Thursday night’s game will serve as the Tigers’ senior night. The seniors, including the band, the cheerleaders and the football team, will be recognized during pre-game festivities at 6:30 p.m.

Last week, in some late-season theater, SHS earned a berth to play in the Class 4A state playoffs with its 25-8 victory over Ashford, and Alabama Christian Academy’s victory over Hillcrest-Evergreen.

“I don’t think it could’ve worked out any better,” Taylor said. “We (the coaches) knew last week that there was still a scenario.

“We chose not to tell our kids,” he said. “I felt that it was one of those things that sometimes you need to play for. I didn’t want to put that kind of pressure on them. The only thing we talked about at all last week was winning out and trying to have a winning season.”

With their victory last week over the Yellow Jackets, the Tigers improved to 5-4 overall, and 3-4 in the region.

Taylor said he thinks the players found out during the week that they had a shot to make the playoffs, but didn’t let the coaches know that they knew.

He also said he thinks Ashford has the second-best team in the region.

“Strictly from a talent stand point,” he said. “For whatever reason, our kids played extremely well Friday night. Both offensively, and defensively and even in the special teams area. I don’t know if we had too many miscues.”

The only mistake Taylor pointed out on Monday was a big pass-play his defense gave up during the win.

“Instead of turning the ball over, which has been kind of a nemesis of ours in the games we’ve lost, we created and got some turnovers,” he said.

In the end though, Taylor said he told his players to just “play their game” last week, when the Tigers outscored the Yellow Jackets 19-0 in the second half.

“That’s one of those things that the option is a funny thing,” Taylor said about his offense. “You keep running it, and running it and all-of-a-sudden, it starts to work.

“We’re glad to be where we’re at,” he said. “Just a week ago, things were looking pretty bleak. There were things we couldn’t control and consequently, there was no sense in giving them hope. As long you control your own destiny, there’s something to talk about and get fired up about. When somebody else kind of has you in the palm of their hand, the best thing to do is go play and let things happen.”

Kick off in Straughn on Thursday night is at 7.