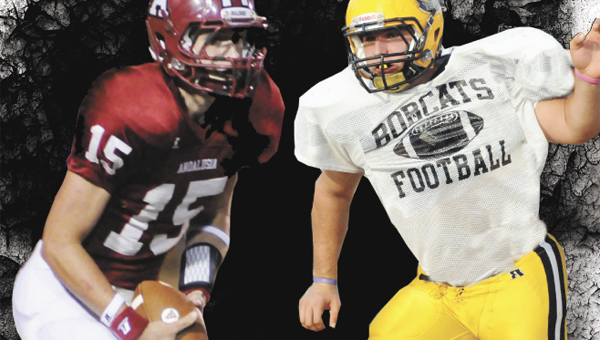 Andalusia senior quarterback C.P. Rogers loves everything there is about the game of football.

Rogers, who leads the Bulldogs in rushing this season, will try and help lead seventh-ranked Andalusia to a victory tomorrow night against long-time rival Opp at Chanel-Lee Stadium.

Thus far this season, Rogers has rushed 722 yards on 111 carries and has scored four touchdowns. He averages 6.5 yards per carry.

Rogers said the ability to steer through his opponents’ defenses starts with what play Bulldogs’ offensive coordinator Marcus Taylor calls.

“He always gets in a good play for the offense we’re in,” he said. “The linemen do a really good job blocking. Everybody’s got to respect the sweep.

“That really opens it up in the middle for me,” he said.

Since he was 7 years old, Rogers has played football — a game he admires as well as baseball, another sport he plays for the Bulldogs.

Tomorrow night signifies the 68th meeting between Andalusia and Opp.

Last season, the Bulldogs beat Opp 31-21 at home, but to Rogers that win isn’t something the team is thinking about heading into the game this week.

“I just want to represent Andalusia well,” Rogers said. “The last road loss was against them at their stadium, and we want to avenge that. We want to try to change that. We don’t want to go out losing to them on the road.”

Rogers was referring to the 2009 season, where Andalusia lost to Opp in the first round of the Class 4A playoffs. The Bobcats were a Class 4A school before the new realignment, which took effect in 2010.

Rogers said the keys to success this week are for everybody to ready their keys, do “what we’re coached to do — just executing and not turning the ball over.”

When asked what the team’s mind set is going into the game, Rogers said it was all about “business.”

“It’s a business trip,” he said. “We’re going to go over there and take care of business.”

Andalusia will play host to Elmore County in the first round of the playoffs next week.

Getting a win tomorrow night against the Bobcats would be a big momentum booster going into the playoffs, Rogers said.

“It would be big,” he said. “We need to get by on all cylinders going into the playoffs, so we can make a run.”

Lastly, Rogers said he hopes the crowd is huge at the game.

“We don’t want to let our fans down,” Rogers said. “We want the whole town to come out and support us.”

Rogers is the son of Jenny and Paul Rogers of Andalusia.

Waiting for this game

Trent Finedore’s father put a football in his son’s hands, and the rest as the say, is history.

Finedore, an Opp senior defensive lineman and tight end, will try and help lead the Bobcats to a win over rival Andalusia tomorrow night at his team’s Channel-Lee Stadium.

“We have to beat them,” Finedore said. “We’ve got to beat them. We’ve had good practices. (OHS head) Coach (Jack Whigham) has a really good game plan, and we’ve just been working.”

Finedore said the team has been waiting for this game this whole season.

“This is the game we’ve got to show up, and do our best — show up and show out,” he said. “If we win this game, this will motivate us going into the playoffs. That’s what coach has been preaching to us all week.”

Even the senior football players have been talking about the game, Finedore said.

This season, Finedore can be found on both sides of the ball. Typically lined up on the right side of scrimmage, he can be seen making holes for the many Bobcat tailbacks to run through.

During 2011, Finedore has 26 tackles, and two fumble recoveries.

Finedore said he hopes the team will not “quit” against the Bulldogs.

“I hope that we won’t quit, and I hope we beat them pretty bad,” he said. “I want all of the seniors to feel like they gave their all in this game.

“This is the last regular season game, and this will be the last time we play Andalusia,” he said. “We’ve got to give it our all when we go out there.”

The Bulldogs beat the Bobcats 31-21 last season at AHS, and being able to play in front of the home crowd his senior season is a bonus, Finedore said.

Finedore said the keys to success in the game tomorrow night are to have a good passing and running games, along with having a good defense.

Next week, Opp will play host to Walter Wellborn in the first round of the Class 3A state playoffs, and when asked how big it would be to get a win tomorrow night, Finedore said it would be the best thing to happen to the team this season.

“Like I said, it would set up a big win for the playoffs,” he said. “It would stick with us forever. It’s the biggest game of the year.”

Opp gameday changes due to ‘Fest’

The City of Opp will close the area between Cummings and Covington Avenues downtown on Friday to prepare for Opp... read more